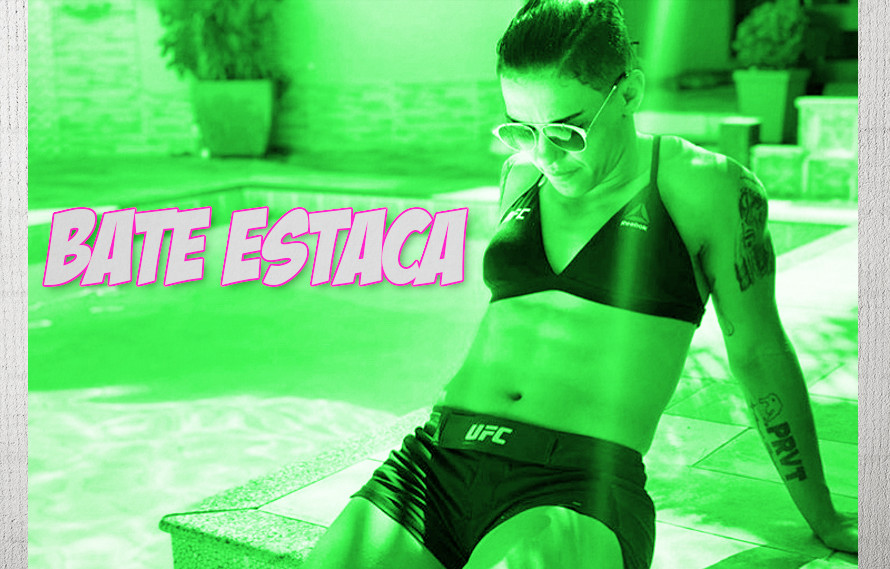 There has been a great amount of talk lately about UFC’s number one strawweight contender, Jéssica Andrade. The idea of a fighter having the nickname “Little Cyborg” because of the way they take over an octagon is ever so precious to watch.

By that we mean kind of scary in a good way more for that fact she doesn’t really stop stepping forward no matter how hard the impact to the face may have been.

And what better reason to stand proud of that nickname other than Cris Cyborg crowning you with the new purpose herself?

After the fight with Gadehla at UFC Japan, that was really the moment the spotlight set brighter on Andrade. It was an impressive fight for Andrade because of the loss from Jedrzejczyk right before.

For awhile the 27 year old was in the background a bit along with the rest of the top fives in the division. However, now it seems she has cut ties and gone her own path. It was just a matter of time.

Depending on where you were on Earth during UFC 228, we hope the impact from Andrade’s 1:58 round one knockout against Karolina Kowalkiewicz made your eyes inflame.

Everything happened so fast.

Meanwhile, trailing backwards down the timeline, the Brazilian fought three rounds each with Tecia “The Tiny Tornado” Torres and Cláudia Gadelha.

“I compare her to a 125 lb guy when it comes to strength and power.” -Cláudia gadelha

The one loss on her record comes from former strawweight Champion, Joanna Jedrzejczyk. These two brawlers threw down for 25 minutes inside the co-main slot at UFC 211.

The fight ended up going all five rounds, with judges giving Jedrzekczyk the win by unanimous decision. Before that Andrade once again had a three fight win streak against Angela “Overkill” Hill, Joanne Calderwood, and Jessica Penne.

From there Andrade was in a position where she was on a successful win streak, but felt she wanted a tune up before the Champ. UFC granted it which was fine and that is really what happened.

There are certain fights that could be looked at as artist and this was one of them. It really said a lot about both fighters.

For Andrade, it meant at the time, never standing back and letting someone else take that goal from them.

Hearts exploded all over that octagon and it never stopped until 15:00 hit the bell summoning the time in the third round. After that it was clear Andrade was ready for gold. Unfortunately she fought the good fight however, it wasn’t good enough for the judges.

Moving forward, Andrade will face the toughest opponent she’s had to face. That being the current strawweight Champion, “Thug” Rose Namajunas. It seemed like a tough double-helix road to get to while Andrade wasn’t too happy with the timeline.

Given what she done to Kowalkiewicz, who was riding on a two win fight streak, with victories against Felice “The Bulldog” Herrig and Jodie Esquibel. Kowalkiewicz was one of the only strawweights in the UFC to win against Namajunas. Yet couldn’t hold the wins as she lost against Jedrzejczyk during UFC 205 and Gadelha at UFC 212.

It was a big moment for the strawweight division and what Andrade did that night in Dallas. From that moment it grew into a title shot.

For awhile, the strawweight division has been on a role as far as quality fights and Champions. As time went on, it is about the ones who’ve been left to ‘dissolve’ as a dark horse and those actually coming out shining in silence. There is a chance in Brazil that Andrade could shock the world and become Champion right in her own backyard.

Namajunas is very calm, cool and collective. Given the assertiveness of perfection and being ready at any moment brings this fight to a whole new level.

If Andrade gets the win, the most ideal match-up that would be next would have to be the winner of Nina “Strina” Ansaroff vs Tatiana Suarez.

Given the rise of both fighters up the charts it makes the most sense for one of them to get a shot at the title no matter who is holding the belt. Michelle “The Karate Hottie” Waterson has been mentioning her win against Kowalkiewicz gets her a shot at the belt as well.

Can’t really blame fighters when they go out giving a solid performance as an underdog. During UFC 234 fight week, Jedrzejczyk mentioned coming back down to strawweight after the loss against current flyweight Champion, Valentina “The Bullet” Shevchenko.

At this moment really anything can happen, yet it is nice to know that Andrade is a real part of the contention and always has kind of been. She will be taking on “Thug” Rose Namajunas as the main event for UFC 237 in Brazil at the Jeunesse Arena.

Will this fight remain standing given the status quo of Andrade’s hands lately? They are at peak of knocking someone out on a dime.

While Namajunas is so frisky on her feet to the point her movements become fluid she tends to have an answer for everything. Without a doubt this is the toughest fight for each fighter right now. Once it is over the good thing is it will answer a lot of questions how the division will carry forward.

Paulie Malignaggi Blasts 'P---y' Conor McGregor: 'When I Put His Boy In A Coma' He'll Have To Fight
← Read Last Post

Yes, both fighters fighting style is the biggest threat to each other style but we also have to look at the growth in skill improvement. At 27 Andrade continues to improve on her striking and grappling skills. The difference with Rose is her leaps and bounds improvement with each fight that she has had since her coming to UFC. Win or loses, Rose continue to have rapid improvement. I personally believe this is why most have picked her as the underdog in many of her latest fights and then have been shocked by the level she has fought at. Same with her fight with Andrade...a slight underdog! The key factors have been Rose's movement training with Coach Wittman that many casual's don't understand yet. Rose is the most athletic fighter in the strawweight division. When you learn that she competed in cross country, basketball, wrestling in high school (at a high skill level). Also gathering two striking black belts with starting bjj also during her high school years and presently a brown belt soon to be a black belt. Rose bring a mix of skill that will challenge Andrade in her stand up and on the ground. This is just my personal opinion but Rose's foot speed and maneuverability, will create many problems for Andrade. Rose's striking or better stated is her accuracy of striking has continue to improve with each fight. This is about Rose's eyes wide open and seeing her opponent movement and strikes coming at her. You can go back and watch her earlier fights and see her improvement in keeping her eyes open...which contributes to better accuracy and getting her head off line to avoid her opponents strikes. The latest training by Rose appears they will be in the pocket with Andrade with Rose using faints to draw Andrade out and using those great check hooks but from both orthodoxy and southpaw positions. This is also going to confuse Andrade with Rose turning the corner on Andrade from both positions. With body strikes from Rose and timely head kicks. Don't be shock to see Andrade beaten bloody from all the japs and check hooks Rose will throw at her. I believe we will see the next set of Rose's evolution in her striking game. At Rose being 26 years old, the true talent is just beginning to open up. The next 3 to 4 years, will see Rose evolution in fighting mma like JBJ (zone striking, hands, elbows, knees, legs, wrestling, bjj...masterful) without the steroid history...frightening but incredible to watch! Just my opinion but Rose has been setting a very high pace in improving her skill set that many have yet to acknowledge or recognized. I believe this fight will show Coach Wittman's deconstructing Rose's skill set after her lost to Carla Esparza (December 12, 2014) and reconstructing her new game. It has taken Rose just over 4 years to learn Coach Wittman's system and still isn't complete. Rose's full fighting game isn't compete yet! That is the most frightening thing about Rose!!! This should be a great challenge and a great fight to watch. Hope everyone enjoys it!