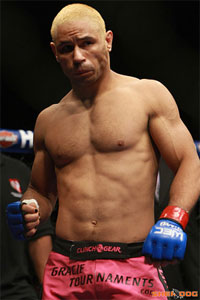 Javier Vazquez sat down with Fight! Magazine just to let everyone know that losing isn’t part of his DNA and on March 6th he plans on finally getting his first win in WEC against Jens Pulver. The reason why you should care what Javier thinks is because he refuses to wear anything besides pink shorts. If a guy is so determined on rocking pink attire, I think he deserves say to whatever he really wants. He’s earned it.

“I’m gonna win and this will probably be the end of Jens Pulver. Whether people like it or not, I can give a rats crap. This is my time and I’m gonna do it. And nothing anybody tells me is going to detract me from it. That’s it. That’s the bottom line. I’m pissed off at the way the cards have been dealt.”

“I’m just tired of telling people I can do it. I’m just going to do it and that’s it. I’m just irritated and pissed off. A lot of people were telling me, yeah I’m a huge underdog. Good. I’m glad people think that. Because the people that think that don’t know their ass from a hole in the ground.”

When we went to The Ultimate Chaos, we managed to see 0:59 seconds of Javier Vazquez in action against Mark Kergosian before he quickly won via rear naked choke and then casually walked out of the cage like some viking conquer with pink Clinch Gear attire. Javier Vasquez will bang against Jens Pulver at WEC 47 on March 6th and if you have DirecTV, enjoy looking at the back of your hand that night.  [Source]