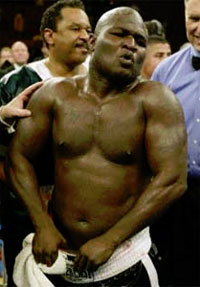 About 1,000 years after the apocalypse, the last remaining homo-sapiens will roam the Earth and dig for human remains to re-research everything we already know about anatomy. They will rewrite medical books and rebuild life-size skeletal models amongst all sorts of mundane things to properly restart civilization. One day, they will stumble upon the unmistakable remains of James “Lights Out” Toney, then rejoice in song, dance, and miscellaneous ritualistic behavior as these remains will serve as a metaphysical lifeline into the future.

We’re not sure who James Toney’s sources are, but we’re not the kind of journalists to doubt anything he affirms with ‘you know what I’m sayin?’. Instead, we just smile, nod, remember that he’s 72-6-3 and one of the best boxers who’s ever lived. Nevermind what Dana White said about the winner of Roy Nelson and Junior Dos Santos fighting for the next heavyweight title shot after Cain Velasquez and Brock Lesnar square off at UFC 121, James Toney has next and there’s nothing anyone can do about it.

“The person I wanted to fight right off the bat was Brock Lesnar. He’s a champion, I’m a champion and I wanted to do it. But they said I couldn’t do that. Then they said, ‘How about Kimbo?’ But I said, ‘That’s too easy. That’s like kicking a little kid’s butt.’ But then Randy started saying he wanted to fight me, so I said, ‘OK, you’re the first one getting it.’”

“I told Dana my goal is to hold the heavyweight championship of the UFC and in boxing at the same time. So as long as it takes me to get Brock Lesnar, that’s how long it’ll be. If Lesnar gets by Cain Velasquez, I’ll fight Lesnar in February or March. Lesnar ran away from Shane Carwin like a girl, but then Carwin ran out of gas and quit. But I’ll fight any of them, any time anywhere. That’s my motto.”

I always liked Joe Silva, but he’s no longer necessary in the post-apocalyptic world. James Toney calls his own shots, and if you don’t like him, he’ll slap you silly. With less than a month before UFC 118, Randy Couture has been relatively quiet about what may come after James Toney, but it’s certainly conceivable he’d fight for one more title shot if he beats Toney in a convincing fashion. On second thought, in five years from now I’ll probably end up copy/pasting that exact same statement into an article about Randy and his relevance for title contention. I hope he never retires. [Source]