James Toney has tapped out King Mo in training, yes you read that right 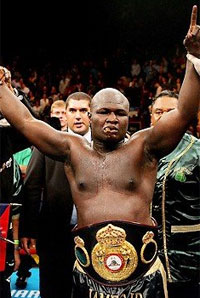 Last night, I had a dream of Lil’ Nog playing the accordion in a mariachi band. I didn’t write it down, so the totality of that dream is a bit hazy, but I’m sure there was more to it than that; maybe something within the realm of Kyra Gracie helping Marloes Coenen do a keg-stand or…Tito Ortiz having a sense of humor. Believe it or not, the most confusing part of my morning was seeing orange flavored-residue left on my fingers after eating half a bag of nacho cheese Doritos last night. At first I was apprehensive, but a few short moments later I realized that it’s the most delicious way to start your morning alongside a cup of coffee and just about anything you can read about James Toney.

Some of you remember Toney’s promise to the fans (and the haters) that he would choke out Randy Couture at UFC 118. Don’t all jump on the LOLercoaster at once, because James Toney was 100% serious. There have been rumors that “Lights Out” has a guillotine so strong, it actually made King Mo tap. Those rumors were confirmed by the Strikeforce light-heavyweight champion on his Facebook account:

We’re not sure if the Frito Lay Corporation has anything to do with James Toney’s strength or if these new-found submission skills will play a role in his fight with Randy Couture, but according to King Mo, “Lights Out” is taking this MMA debut very seriously and he’s going to surprise a lot of people. For all of you degenerate gamblers out there keep in mind that James Toney has over 116 fights in his career (83 as a pro), he’s never been finished in a fight, and he’s still the +475 underdog. [Source]