As if her struggles in the cage aren’t enough, Cyborg is facing another one outside of it.

Shortly after her win at UFC 219 over Holm, Cyborg once again became the subject of disgusting comments made by Mark Aragon – the official video & media director, as well as a photographer for Jackson-Winkel- Holm’s longtime gym – on social media on early Sunday morning.

Previously, from attacks regarding her look overall to questions enclosing her gender, the attacks have come from other fighters such as former champ Ronda Rousey, as well as UFC brass Dana White, mocks Cyborg walking in heels during media scrum back in 2014.

“I said, when I saw [Justino] at the MMA Awards, she looked like Wanderlei Silva in a dress and heels. And she did, did she not? Who wants to dispute that she didn’t look like Wanderlei?

“She was walking up the stairs, jacked up on steroids beyond belief and looked like Wanderlei Silva in a dress and heels.” Dana White (transcript via MMA Fighting)

As per journalist Damon Martin.

The staff photographer from Jackson-Wink posted this last night. Apparently he was also credentialed to the fights. Would expect a lot more from such a well respected gym. https://t.co/EYXRLE4Vs4 pic.twitter.com/YaAMuEyJOA

“This dude is tough as hell! That being said at the press conference he said Holly was the first one to make his nose bleed! You are my hero @HollyHolm see you back in the gym #UFC219” 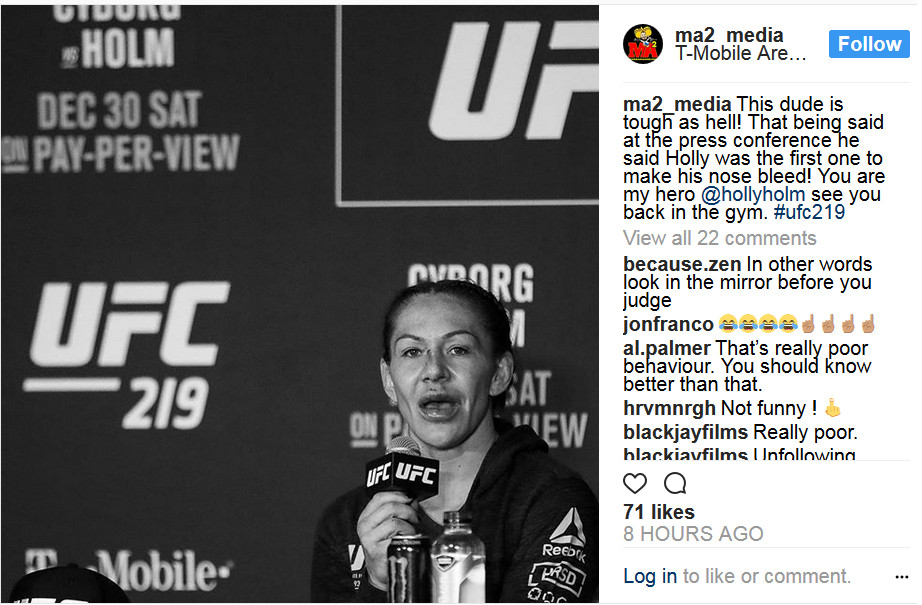 Later, the post has immediately been met with some huge backlash from others in the media.

With that said, the most feared women’s striker on the planet, Cris Cyborg, fires back took to Instagram herself in condemnation of the slight on Monday:

“It is not acceptable for an official representative of @hollyholm @jacksonwink_mmato call me transgender following my Fight. Their official photographer was given a credential backstage to [email protected] and I expect an apology or their ability to get credentials for future UFC events to be affected by these actions. @ma2_media

It is not acceptable for an official representative of [email protected] @jacksonwink_mmaCall me transgender in the wake of my fight. Your official photographer received a backstage credential to [email protected] and hopefully an excuse or your ability to obtain credentials for future events of the @ufc_brasil affected by these actions.”

Cyborg asked for either an apology or the photographer’s (staff member) media credentials to be revoked.

I want an apology @JacksonWinkMMA I was nothing but respectful to @hollyholm and your team @ufc @Mickmaynard2 https://t.co/W31JOxGtlq

What do you think of all the remarks made by Jackson-Wink staff member?