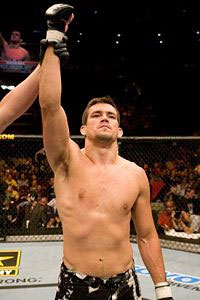 Dan Henderson must be slapping himself in the face with a microwave right now. Last year he got on one knee to propose a title shot between him and Anderson Silva. Dana White denied Hollywood Hendo his shot and granted it to Vitor Belfort. Even though Vitor Belfort publically said he really didn’t want a title shot, he thought he would give it a whirl.

Anderson Silva had to delay his title defense as he recovered from some mysterious elbow surgery that his camp denied, but later admitted to being completely true. Ando was ready to rock and roll, a date was set for his title defense at UFC 112 and then yesterday, Vitor Belfort had to drop out of their match due to a shoulder injury. Since then, Belfort had a successful surgery and is recovering in some undisclosed location (it’s rumored to be California). This left Anderson Silva devoid of an opponent for UFC 112. Rumors flew that Chael Sonnen was going to be tapped to take Belfort’s place but then news surfaced that Sonnen was on a medical suspension and could not even train until March 9th. Names like Patrick Cote, Ricardo Arona, Jon Bones Jones and even Paulo Thiago started to fly across the MMA world like nip slips at a party in SOHO. As I typed this, the UFC just confirmed that Anderson Silva will square off against Demian Maia for the Middleweight title at UFC 112. Whew, glad that’s over.