If you’re wondering what happened to the traditional MiddleEasy background, don’t worry. It’s hibernating and slowly evolving into something even more ridiculous for the remainder of 2012. In the meantime, ONE FC will be taking over MiddleEasy.com leading up to the promotion’s second event on February 11th in Jakarta, Indonesia. The event is called ‘Battle of Heroes’ and it will feature fighters from twelve different countries all competing in a small circular cage — with Pride FC rules. Yes, folks — that means exactly what you think it means. With One FC, MMA fans have the opportunity to witness world-class muay thai champions soccer kick their opponent into parallel dimensions. Head stomps to a downed opponent are also allowed within ONE FC. We’re basically seeing the verge of a new Golden Renaissance in Asian MMA — and it all starts with ONE FC.

Imagine gathering all the top Asian MMA promotions (DREAM, Road FC, DARE, URCC…etc) and combining them into one massive network in which champions will truly fight other champions in cross-promotion title unification bouts. That’s precisely what Victor Cui, the head of ONE FC, plans on doing. I’m sure you’ve read our interview with the CEO by now. In the feature, Cui details his plans for Asian MMA domination, including integrating more women into the mixed martial arts scene in the Far East.

Now ONE FC has selected MiddleEasy to be their vehicle in getting ONE FC: Battle of Heroes nailed onto the screen of every MMA fan out there. We’re stoked to partner with this very promising MMA organization, and we’re already manifesting some ridunkulous content leading up to February 11th in Jakarta, Indonesia.

Check out the finalized fight card for ONE FC: Battle of Heroes: 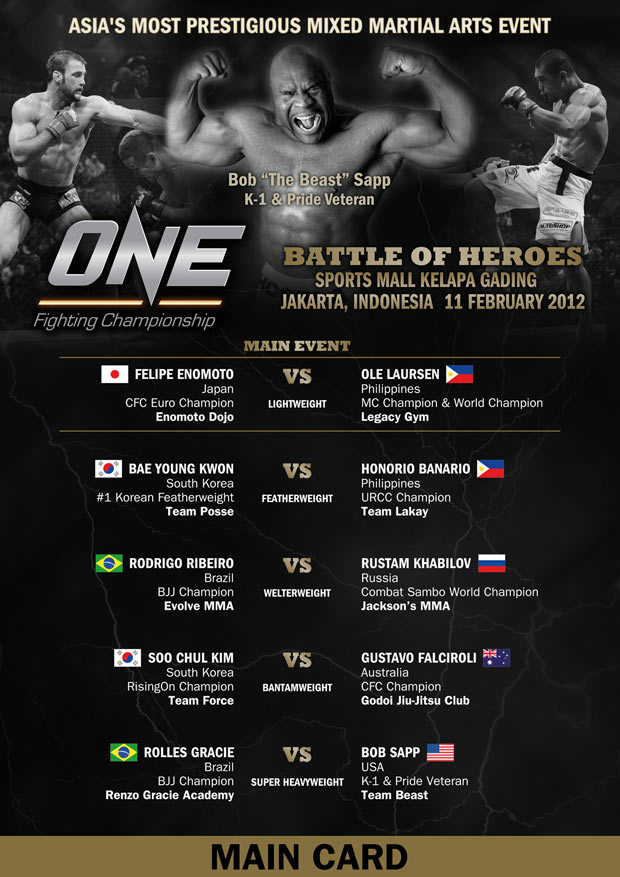 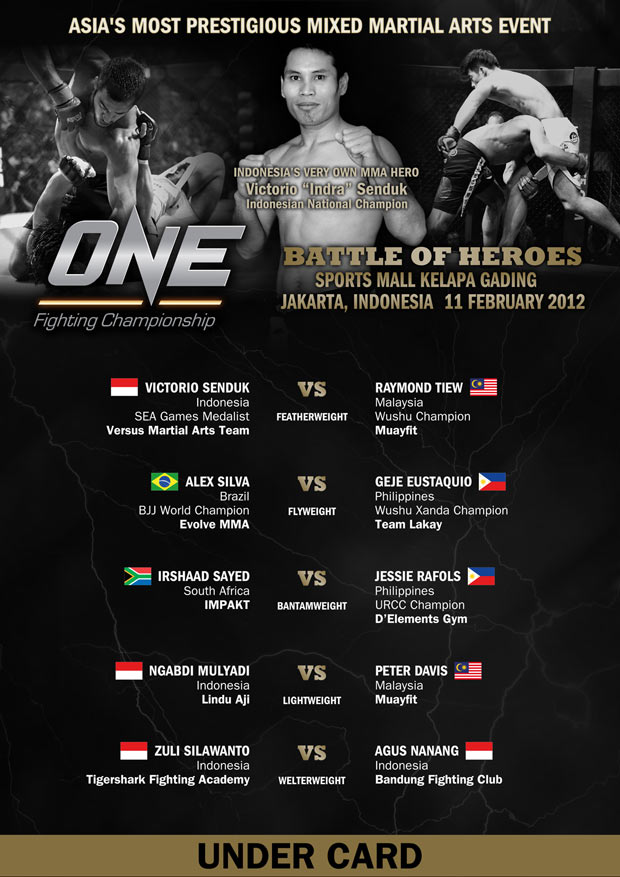 Aside from guys like Bob Sapp, Rolles Gracie and Ole Lausen — we understand you may be a little confused at the fight roster. Rest assured in the local Asian combat sports scene, these guys have kicked enough available ass to be featured in ONE FC — and that undoubtedly means something. However, it’s our task on the MiddleEasy Network to introduce you to the fighters that will be doing battle at ONE FC: Battle of Heroes. Over the days leading up to the event, we will be featuring these fighters within MiddleEasy, DstryrSG, LiverKick, WHOA! TV and even FighterXFashion. By February 11th, your brains will be so educated in the Asian MMA scene that your nose will leak budo.

MiddleEasy was on location in Singapore to cover ONE FC’s inaugural event at the Singapore Indoor Stadium and we’ll be there for the promotion’s second event in Indonesia. Los Angeles based music video director, Patrick Fogarty, will be accompanying me to the event — so expect an abnormally high amount of dopeness. Patrick is the winner of the 2011 Alternative Press Music Video of the Year, but you probably know him best from the work he did on MiddleEasy’s ‘The Saint of Stevia: The Legend of Dan Quinn.’ We still have hours of footage on memory cards stored inside empty shoe boxes — so we’ll eventually get around to making it into a film.

Check out this highlight reel from the infamous Zombie Prophet of ONE FC’s inaugural venture into the land of Asian MMA on September 3rd 2011.

After fighting a guy with a knife, Guy Mezger has the nastiest cut you will see this year.
← Read Last Post