The year was 1987. I was a happy five year old shopping for groceries with my aunt while riding in the little area below the shopping cart normally reserved for bottled water and dog food. I remember thinking that this particular supermarket had a very spacious undercarriage in their carts, and I enjoyed the leg room and newfound maneuverability.

Then like an idiot five year old I stuck my thumb in the cart’s wheel and it tore my thumbnail out at the root. Blood gushed everywhere (not really) and I made a big scene.

June 12th, 1996. The Chicago Bulls just lost to the Seattle Supersonics in that year’s NBA Finals, putting the series 3-1. Since I couldn’t celebrate the Bulls winning a fourth NBA title (yet) I climbed up to the roof of the local elementary school. Somehow I ended hanging off the roof by the gutter, then the gutter broke and I fell twelve feet to the ground but landed quite comfortably into a bush. After creating such a racket, I sprinted home and made it halfway before realizing I somehow tore half of my nail off the pointer finger. I continued running home then I made a big scene once I got there.

Winter 2002. I slip on ice and slam my car door on my hand. My thumbnail turns black and later falls off. I put the nail on roommate’s food. He made a big scene.

It’s nice to know George Roop and I have a decent conversation starter if we are ever sharing an elevator or something, the Korean Zombie Killer just tore the nail right out of his big toe last night training. This post is from his Facebook.

‘I got my whole toenail completely ripped off last night in training w/ one swift movement. It hurts, just sayn’ 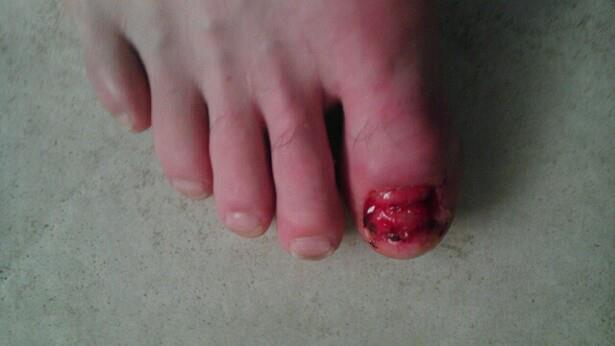 Thanks to Zach Lambertski for the find!

Martin Kampmann tries to give us an interview but it's hard to hear over some psychotic aikido guy screaming
Read Next Post →
Click here to cancel reply.