It looks like Nick Diaz vs. Josh Koscheck will be going down in a few months

If you think Josh Koscheck looks like a character from ‘Fraggle Rock,’ then you’re not alone.

Pee-Wee Herman’s Playhouse was cool back in the 80s, but Fraggle Rock was deep. It was a show that I could never fully understand yet I thought that all ‘Fraggles’ (living or dead) were based on actual subterranean dwelling creatures. Granted, I didn’t know anything about the universe at that time, I was like four. Balancing a cup of milk on a table was a challenge. Now that I’m older and we have technology that enables us to research insignificant facts about 80s television shows, I checked out the science behind the Fraggle Rock world and discovered that it still is far complex than anyone even cares to read about.

Fraggles, humanoid creatures about 18 inches tall, come in a wide variety of colors and have tails that bear a tuft of fur on the end. They live in a system of caves called Fraggle Rock – caves filled with all manner of creatures and features, and which seem to connect to at least two different worlds that exist in different dimensions of time and space. Fraggles live a very carefree life, spending most of their time playing, exploring, and generally enjoying themselves. However, they are by no means irresponsible or simple, and manage to maintain a fairly complex culture and society, with each Fraggle having a particular responsibility to uphold. The series presents Fraggles as curious, clever, brave and quick to act in an emergency. They have basic skills with tools and with crude machinery, and even the concept of war is familiar enough to them (although wars between Fraggles are very rare). Fraggles live on a diet of vegetables, especially radishes and “doozer sticks” (see below). Fraggles have the ability to “share dreams”; if they touch their heads together before falling asleep, one can enter the dream of the other Fraggle. More than one Fraggle at a time can enter a single Fraggle’s dream, provided all the participants’ heads are touching. Deep in the caves of Fraggle Rock lives another group of Fraggles that are known to other Fraggles as Enemy Fraggles (as shown in the episode “Fraggle Wars”). Enemy Fraggles live in a place they call Fraggle Cave. The Enemy Fraggles are dull and seem to be a lot like Doozers in a way in that both dislike Fraggles and neither have a lot of fun.

Our childhood was just one giant hallucinogenic trip. They just don’t make kids like they used to.

In an interview with TATAME, Cesar Gracie announced that he endorses a fight for Nick Diaz against Josh Koscheck in his return to the UFC.

Personally, I like the option of him fighting Koscheck, a guy who is very popular here in the United States, has great public recognition, everyone knows who he is, especially here. Demian Maia is a great fighter, I think it would also be a great opponent, but here in America it is not as popular as Koscheck. So I think Nick probably will face Josh Koscheck in his return to the Octagon

Last night on Twitter on the eve of the entire cataclysmic collapse of the East Coast, Josh Koscheck confirmed that Cesar Gracie reached out to him about a potential fight against Nick Diaz. 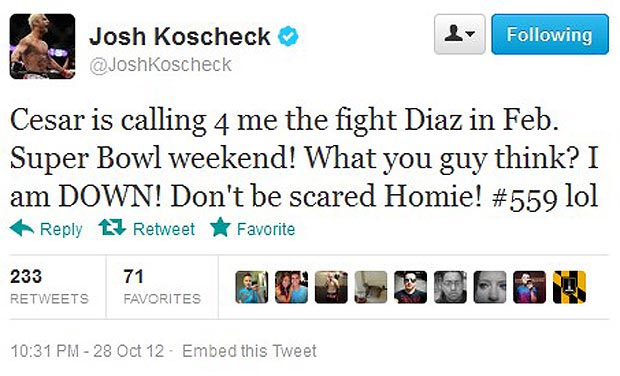 Earlier this month Dana White also stated that when Nick Diaz makes his return to the Octagon, he will need to face a ‘top welterweight’ in order to be back in the title mix. All signs point to a Josh Koscheck vs. Nick Diaz scrap at some point in 2013. Also, thanks for reading MiddleEasy, Joe Silva.