Is there a TUF curse? 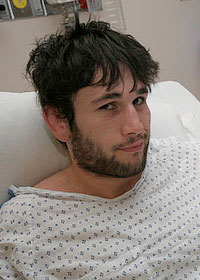 Seems like there may be a more than just the Undisputed curse floating around the UFC lately as TUF fighters went 0-5 at UFC 101, in fact, starting at UFC 98, the TUF crew has gone a combined 3-15 over the last few PPV’s since UFC 98. Not only are they getting beaten but they are getting beaten UP. The Pennsylvania State Athletic Commission issued medical suspensions to 6 of Saturday’s contestants, 4 of which were TUF graduates Griffin, Ken-flo, Dan Cramer and Amir Sadollah (Did the wind of his opponent’s punches throw dust in his eye or something?)

Those are some ugly numbers, those are reminiscent of my old roomate’s fantasy football team. Granted some of the numbers are sketchy since some TUF cast members have fought each other recently.

Here’s a look ahead at some upcoming TUF related matchups:

UFC 102
Chris Leban Vs Jake Rosholt
Leban is 8-4 in the UFC and Rosholt 0-1 may be fighting for a position.

Kryzysztof Soszynski VS Brandon Vera
Soszynski lost in the semi’s of TUF which apparently means nothing because he still got a contract. Nevertheless, the dude is rocking a 2-0 record in the UFC.

Chris Tuchscherer VS Gabriel Gonzaga
This is interesting because it’s Tuchscherer’s UFC debut after trying out for The Ultimate Fighter 10, the powers that be decided to just give him a contract rather than have him go through the show and possibly lose whenever. Regardless the guy looks legit, hes 17-1 with a no contest.

At UFC 103 there seems to be a smattering of TUF fighters, including Mike Swick VS Martin Kampmann and Josh Koscheck VS Frank Trigg so lets see how the fights work out, anything can happen anytime but hopefully the TUF guys (as I’m coining them 10 seasons in) can represent.