Is Frankie Edgar Moving Bantamweight? His Coach Mark Henry Hopes He Does! 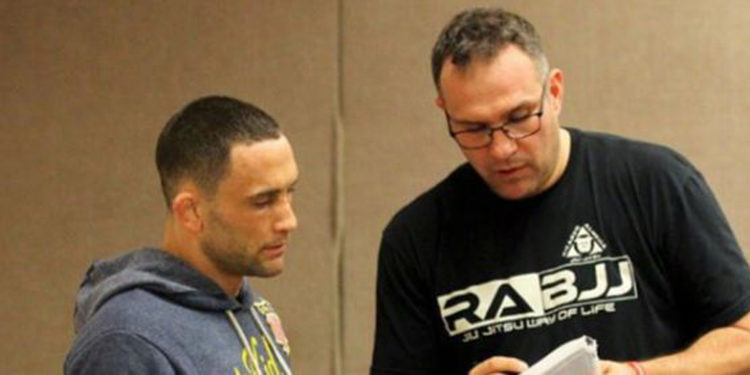 Former UFC champion, Frankie Edgar, dropped his weight to compete Featherweight division after he didn’t have a great score in the Lightweight division. His result was 7-3, with three knockout victories, and his coach, Mark Henry, is worried. But how low can someone’s body go?

Unfortunately, Frankie Edgar doesn’t have a chance to chase the title sooner in the 145-pound division, so his coach, Mark Henry, set an impossible task. He would like to see Frankie Edgar fighting Bantamweight division. (quoted by MMAMania.com)

I’ll tell you one thing: I would love to see Frankie fight at 135,” Henry told ESPN. “Every time Frankie has fought somebody his own size, he’s done very well. It’s tough when you’re giving up size, height and range.”

Frankie Edgar risked his spot in a title fight versus Max Holloway by facing Brian Ortega. Since Ortega won the fight via knockout, Frankie is eliminated of the title shot.

“Honestly, I don’t think he’ll move down unless it’s for a title,” Henry said. “I think for him, it’s a toughness thing. I’m guessing he looks at it as moving down looks like a weakness. Well, that’s his weight. If Frankie is 15 pounds less than someone on fight night, that’s three weight classes in boxing. That’s a lot.”

Edgar turns 37 this year, and he has a score of 22-6-1. Due to his age, he has to return to his horse as soon as possible, and picking people of his size could be highly beneficial. But the question of his weight class and next opponent remains open for now.

It definitively looks like an impossible challenge. What do you think, can Frankie Edgar drop at 135?

Frankie Edgar Looks Shredded Ahead Of His Bantamweight Debut