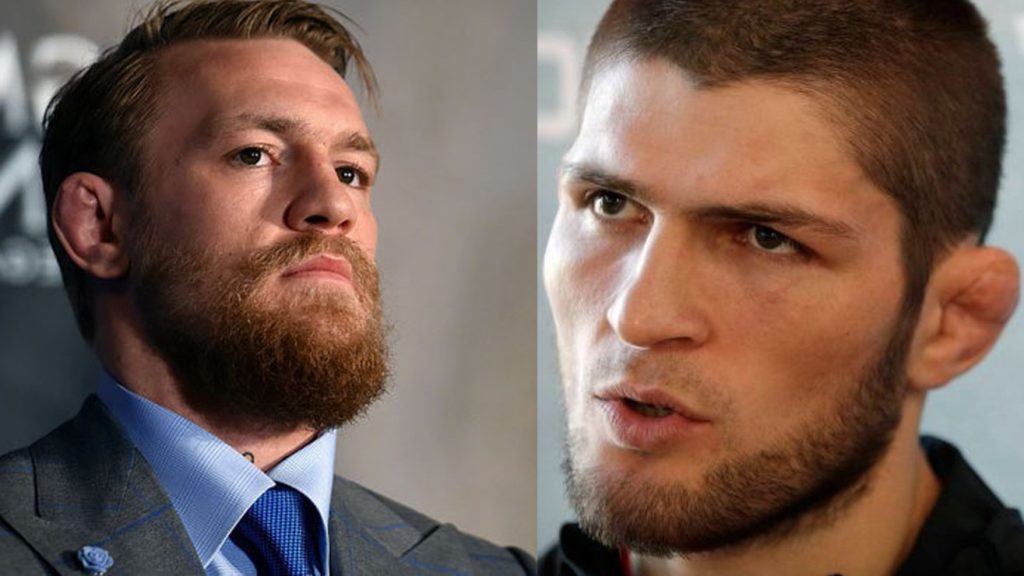 An act of shame happened after the main event of UFC 229. Khabib Nurmagomedov snapped, jumped the Octagon fence and attacked Dillon Danis. It quickly escalated into the riot. It was even continued inside the Octagon. Irish newspapers heavily criticized both fighters, MMA, and UFC 229.

Here is the brief overview of Irish newspapers and the catchiest headlines on Monday morning. Fighters and organization are put under a serious set of critics!

Irish Sun put a headline “McGregor MMAYHEM”. The description is related to Khabib’s teammate who sucker punched The Notorious. 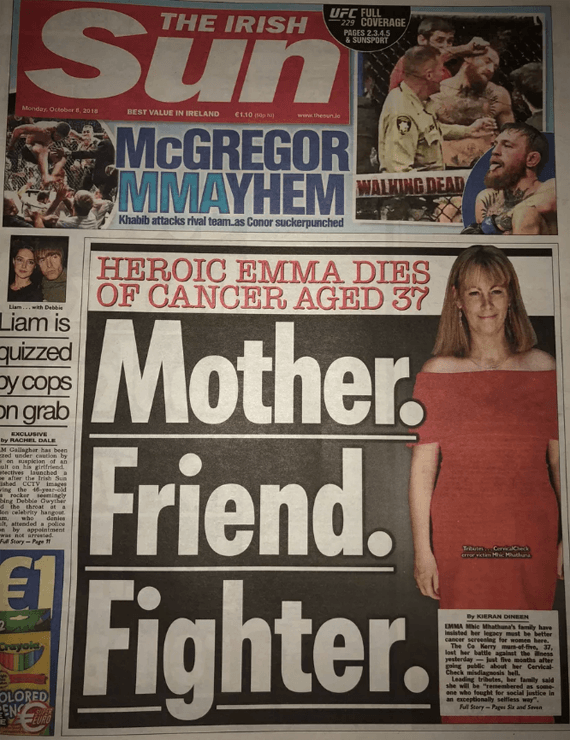 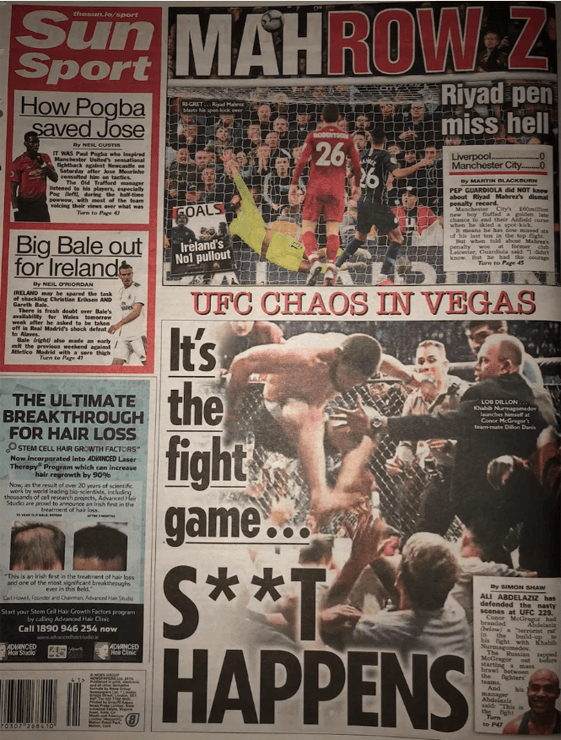 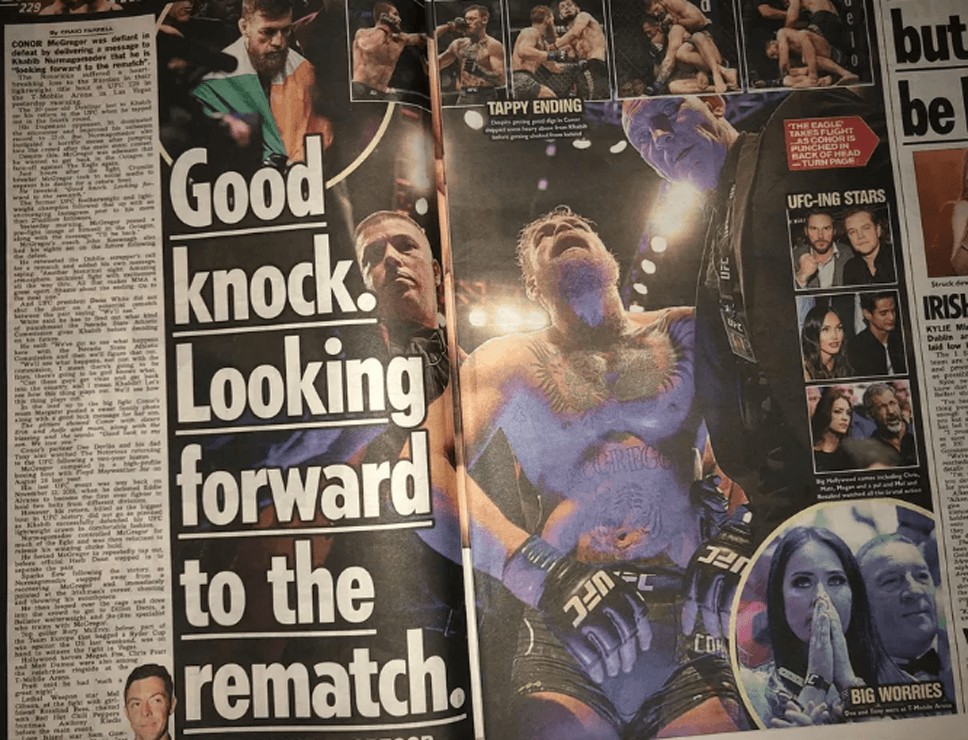 You can also find an article inside the news about the fan who was injured in “Khabib’s rage”. (Michael Doyle, Elaine Keogh, Sarah Curran) 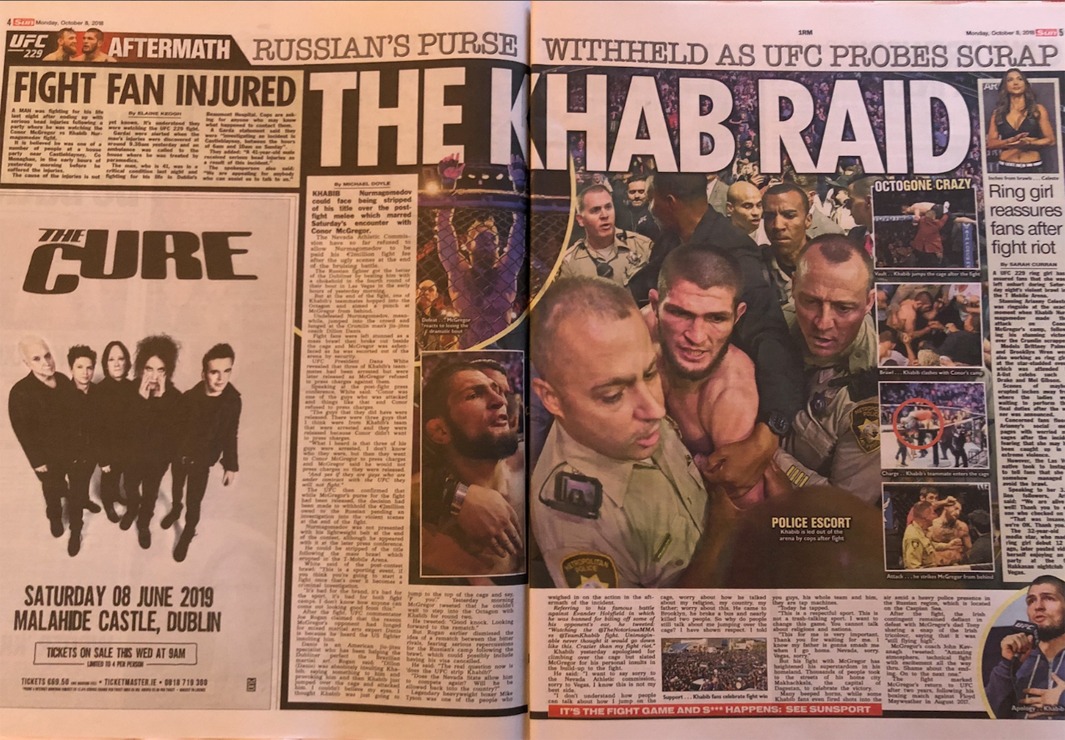 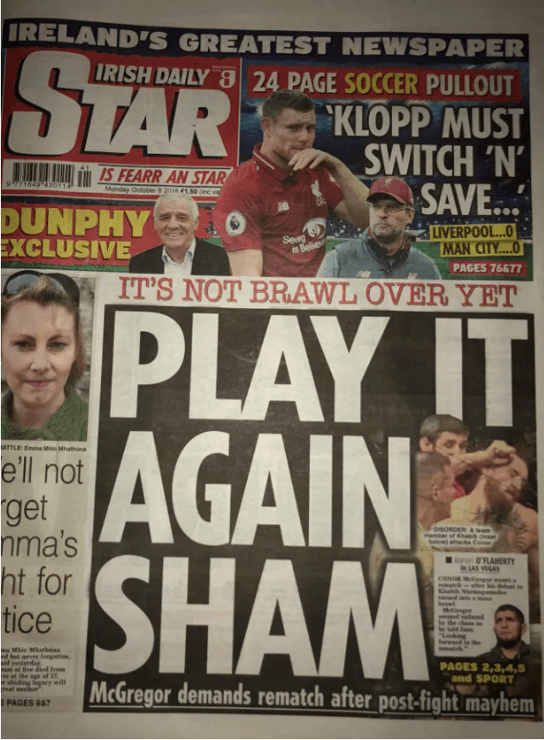 The back page is about “frightening scenes” in the “Sin City”. UFC 229 is described as “steaming pile of manure”. (Kieran Cunningham, Ronan O’Flaherty) 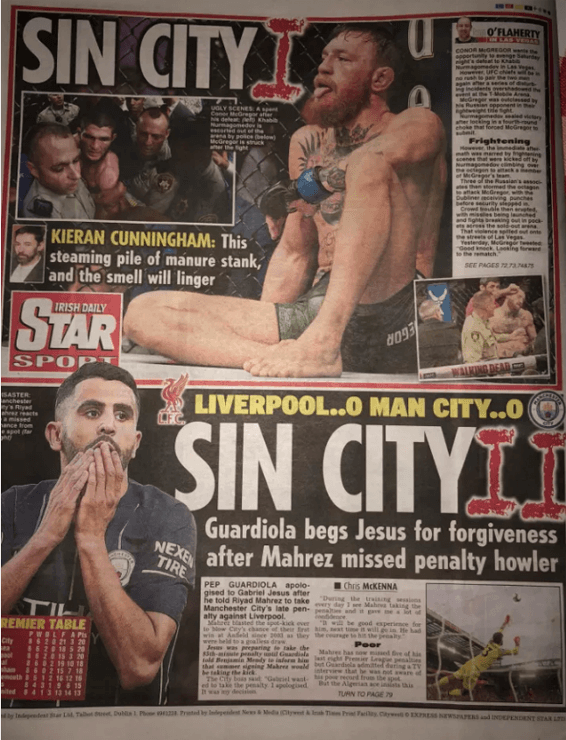 The news section has the headline “Nurmageddon”. It describes the shameful act that happened after the UFC 229 main event. (Ronan O’Flaherty) 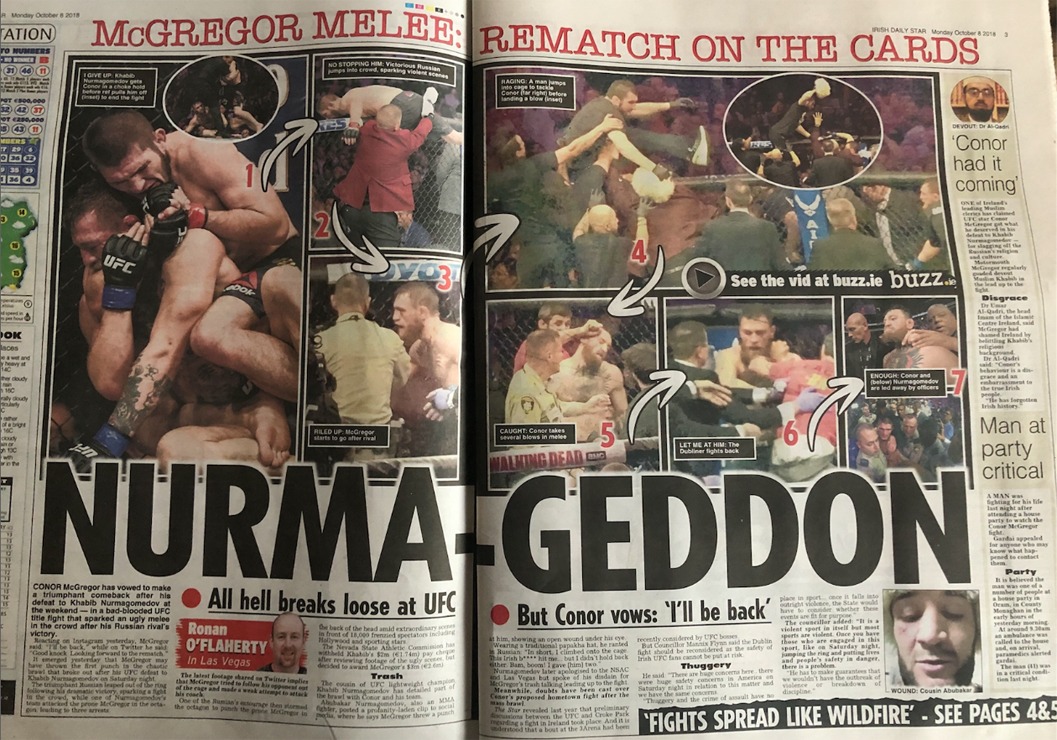 “Nevada’s night of shame” is the hot topic in the sports pages. Also, it contains some interesting info about Conor’s request for a rematch. (Don Marrinan, Ronan O’Flaherty) 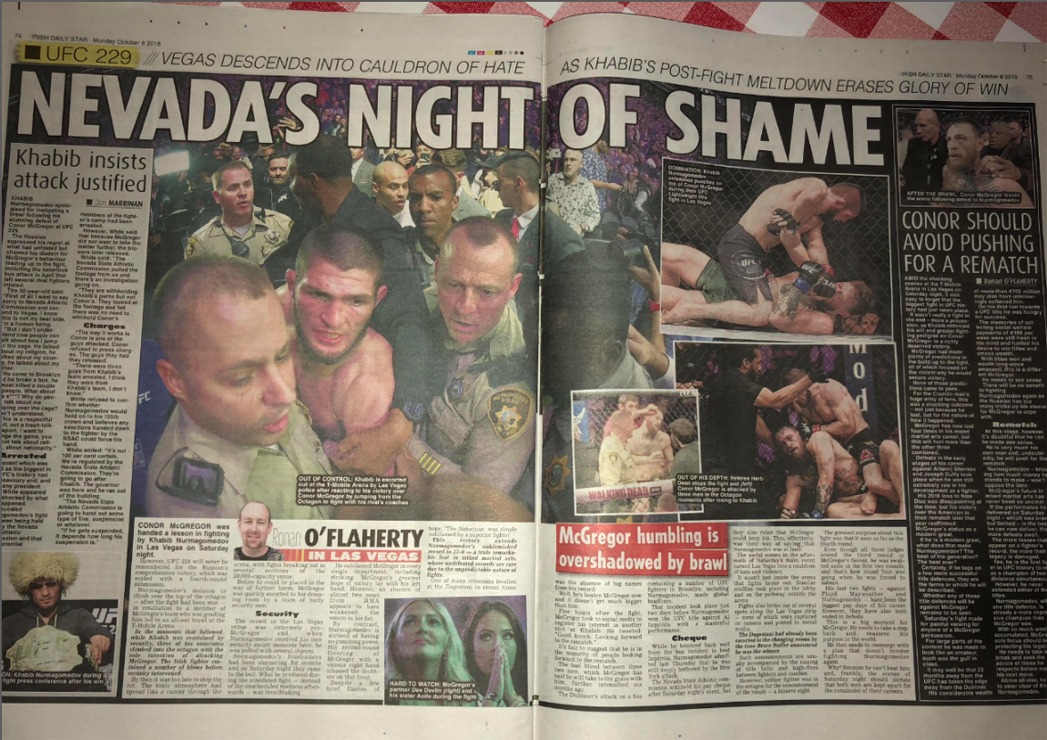 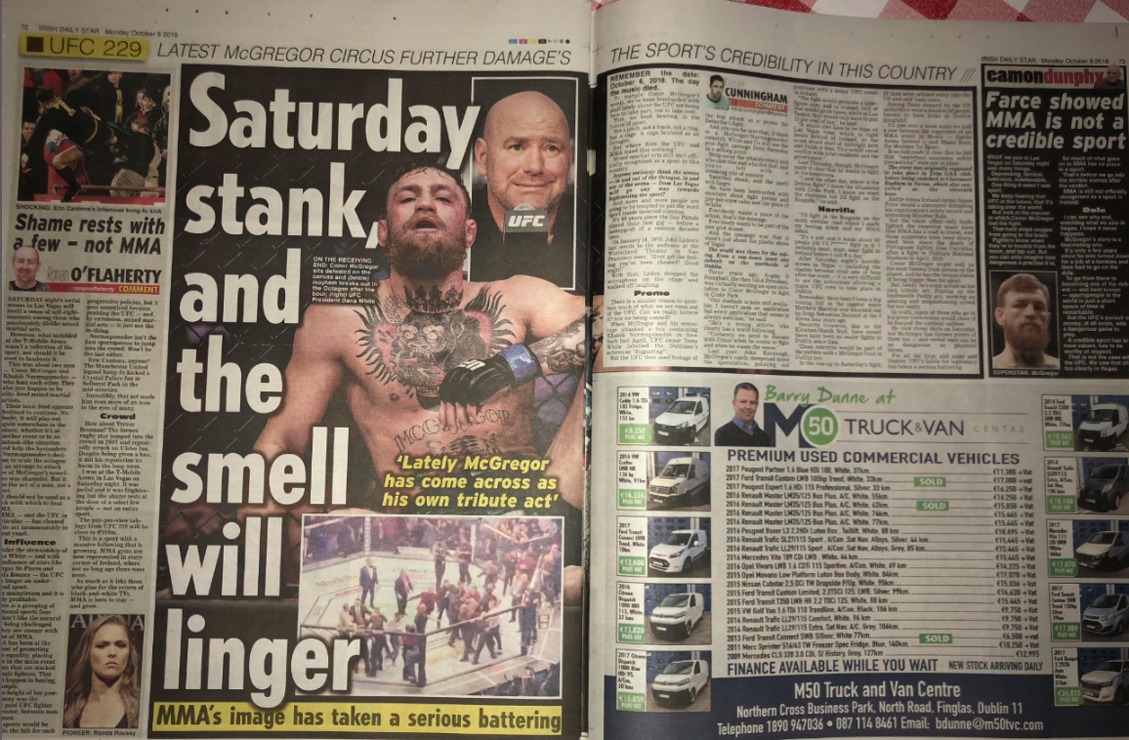 The front page gives some color to “Brawls boys”. 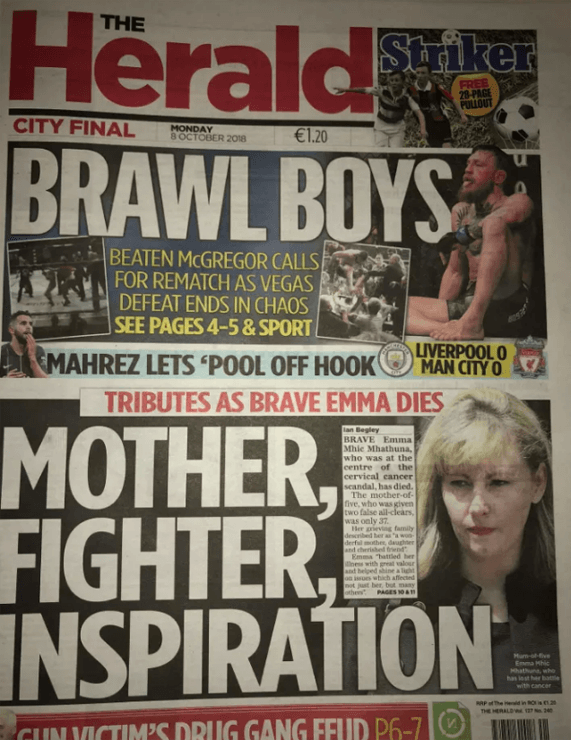 In the back page, UFC 229 is described as a real “nightmare”. (Ronan O’Flaherty) 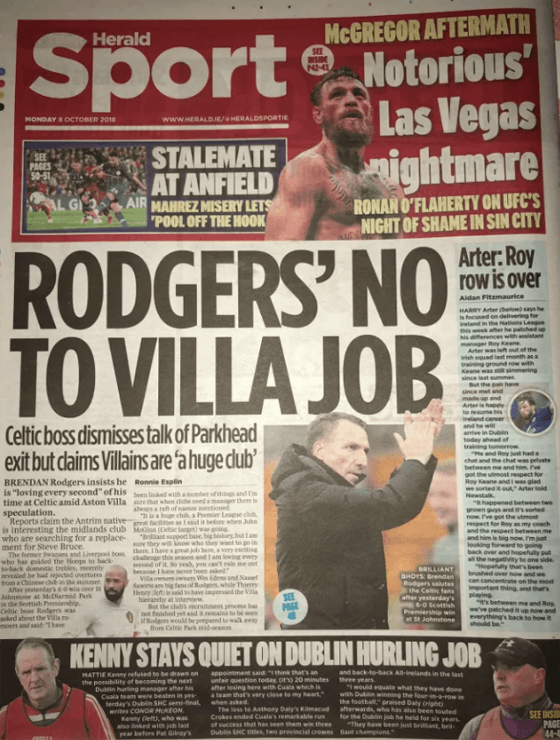 News page talks about the support Conor McGregor received after the loss. This is also an interesting part of Irish newspapers since it writes about The Notorious asking for a rematch. (Ryan Nugent, Ger Keville, Elaine Keogh) 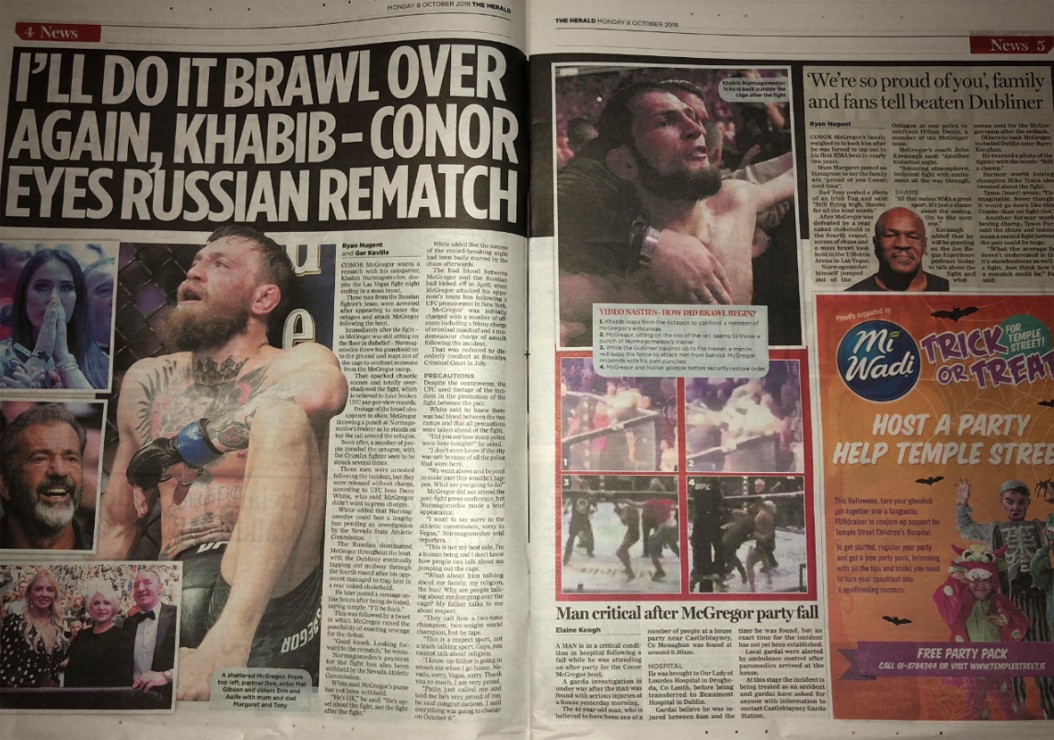 In the sports section, you can find an article about “disgusting scenes” in Las Vegas. (Shaun Smith, Ronan O’Flaherty) 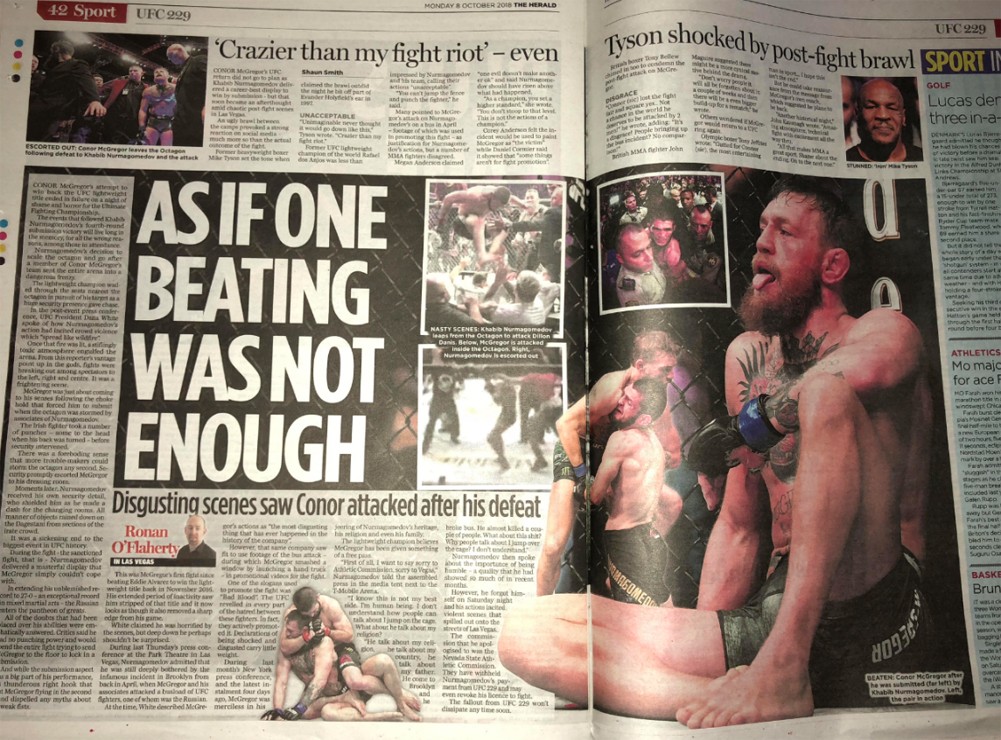 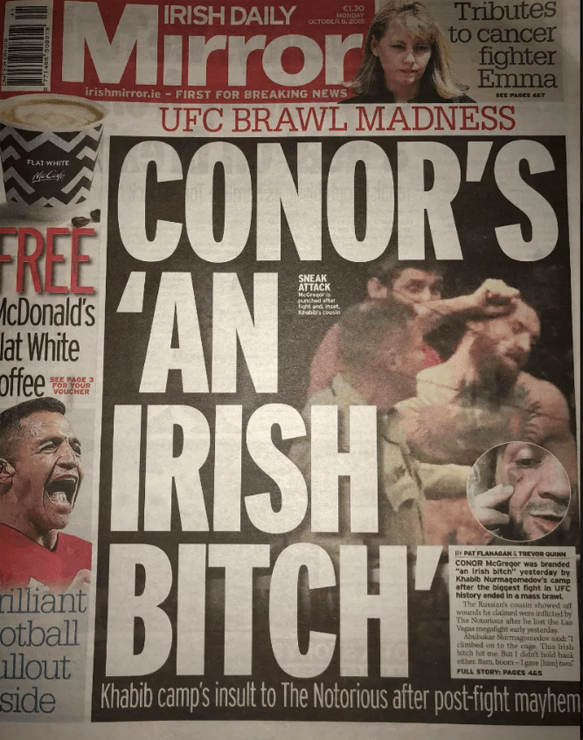 Back page says Khabib Nurmagomedov might be stripped of the UFC Lightweight title. 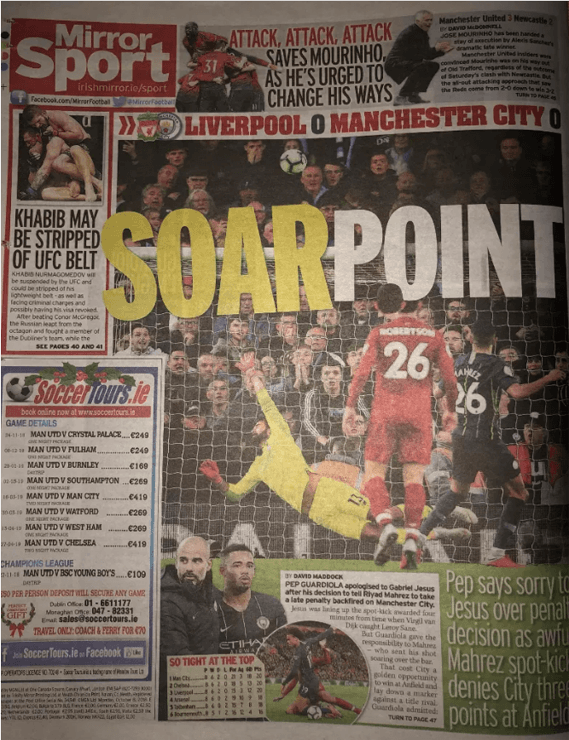 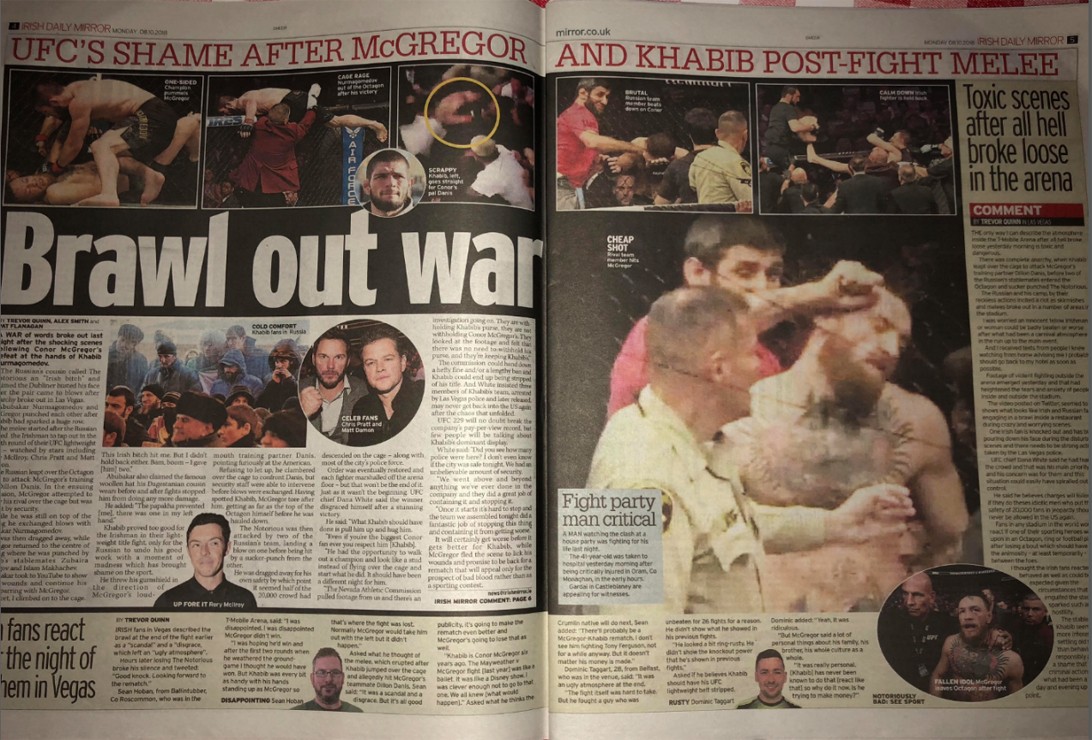 The sports pages describe Conor as “notoriously bad”.  Alongside his bad performance, UFC is put under critics for not controlling their athletes. (Andy Dunn, Martin Domin, Peter Carroll, Peter Ramsey) 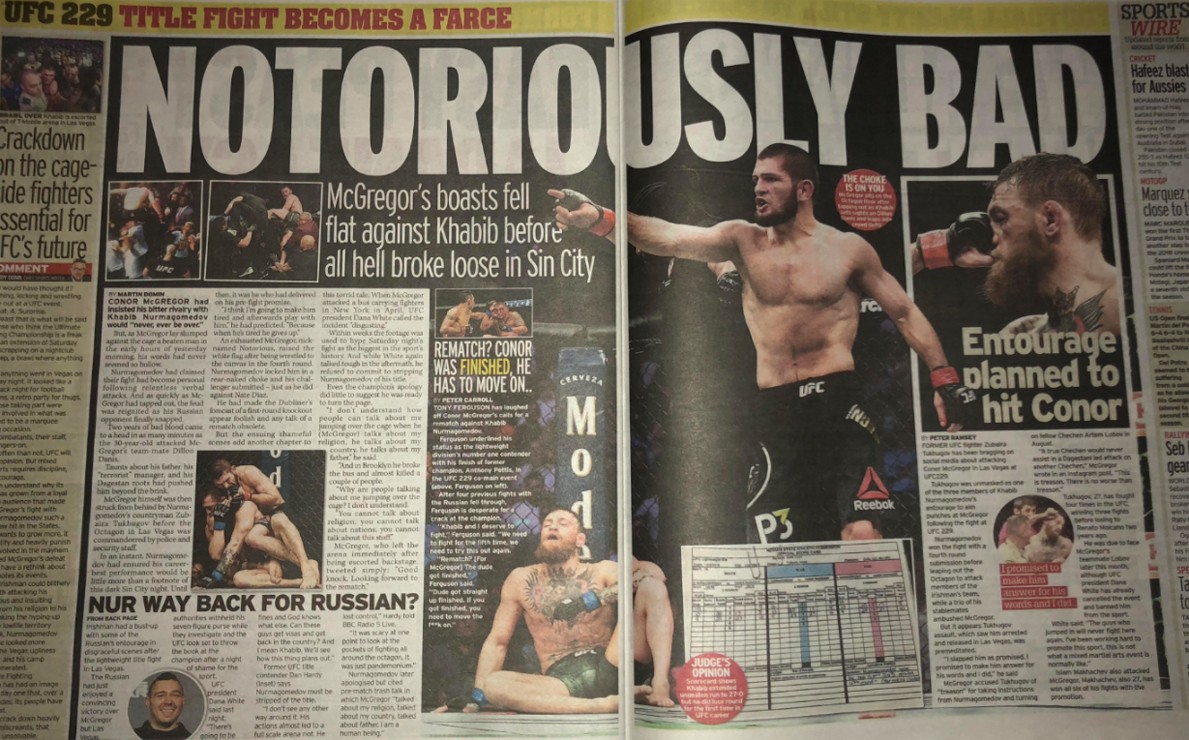 The front page has the headline “McGregor on the slow slide to the scrapheap”. 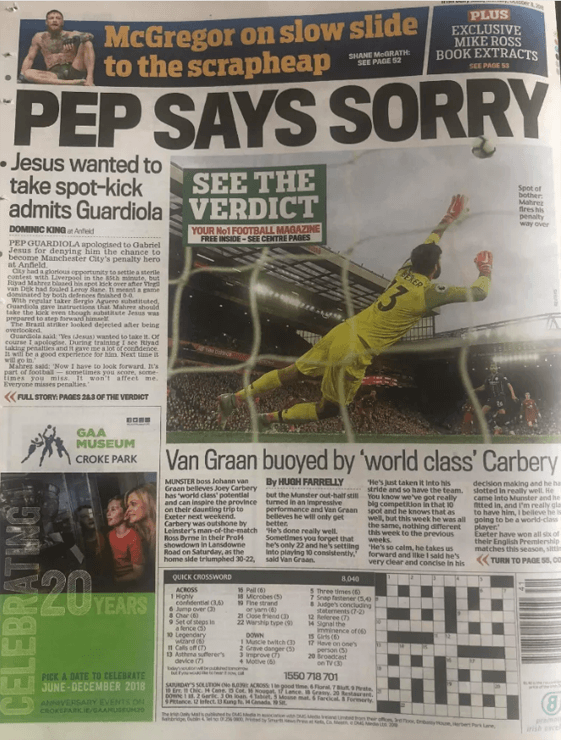 The sports section describes sad Conor McGregor and his acceptance of reality. Also, this is the only part of Irish newspapers that take a look at Khabib’s side of the story. (Shane McGrath) 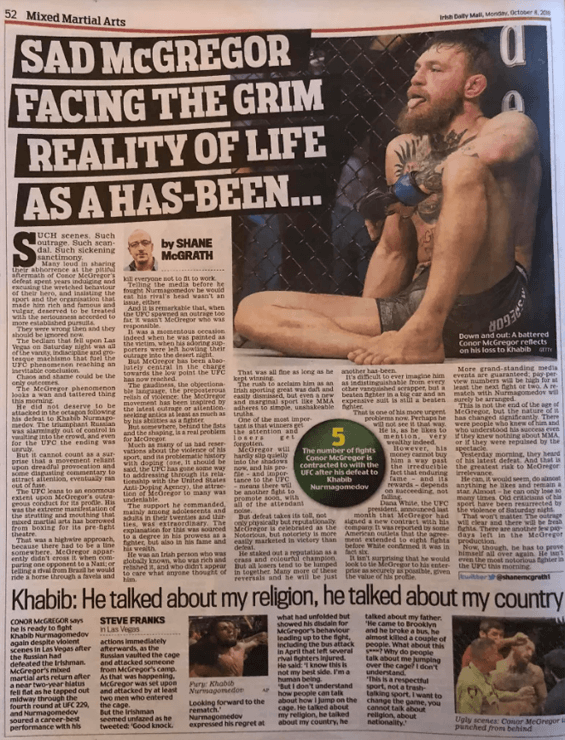 News section describes Conor McGregor as the man “at the center of shameful scenes once again”. (Craig Hughes) 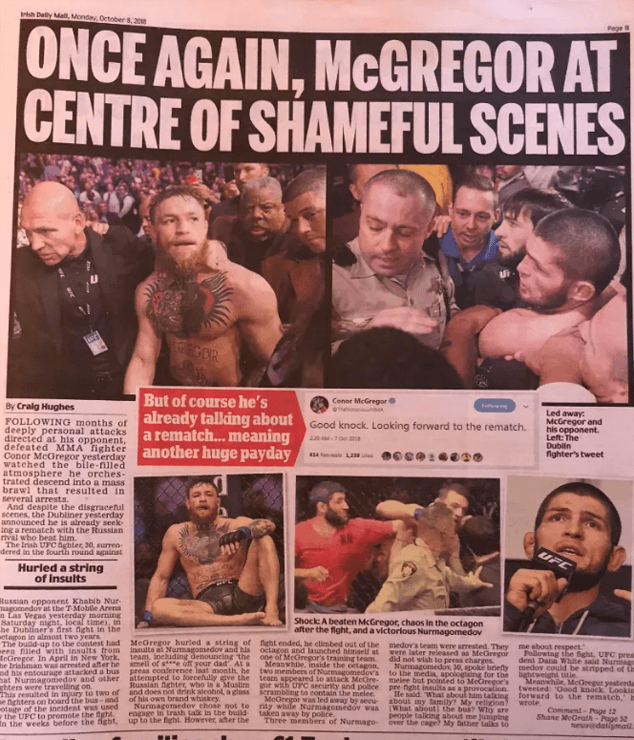 The front page describes the humiliation of Conor McGregor. 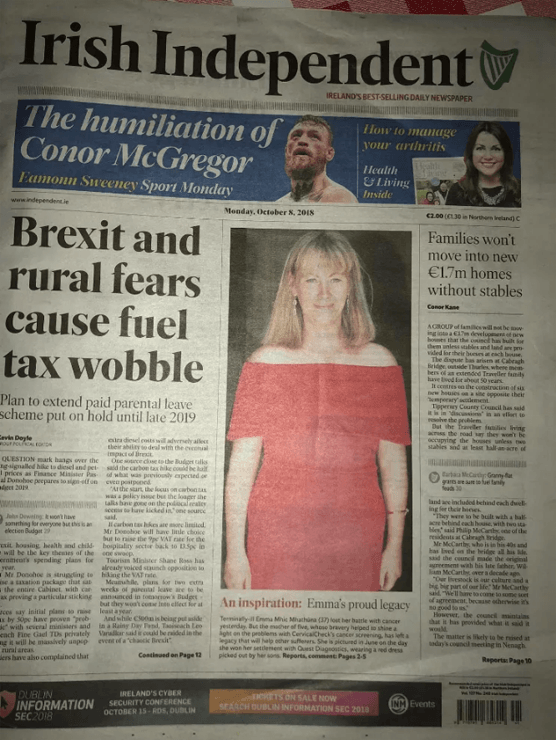 The back page makes a comparison between the British TV show “Love Island”, and MMA. (Eamon Sweeney) 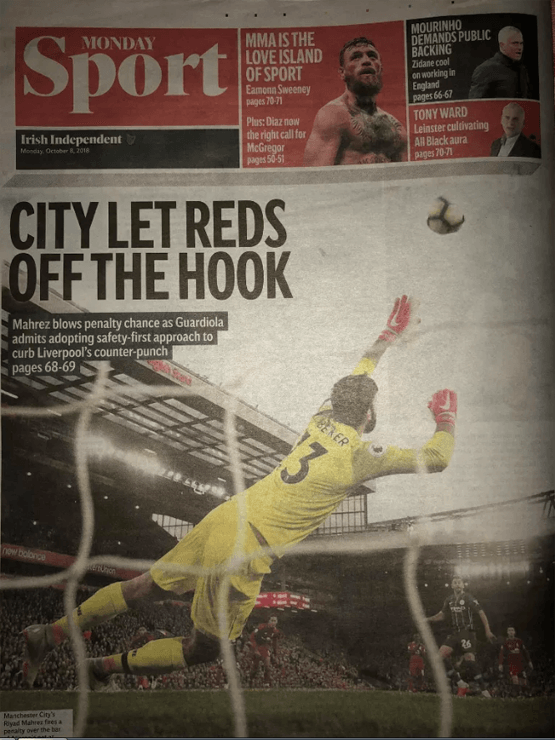 In the news section, an article is dedicated to Mystic Mac and his calls for a rematch. (Ewan MacKenna, Ryan Nugent) 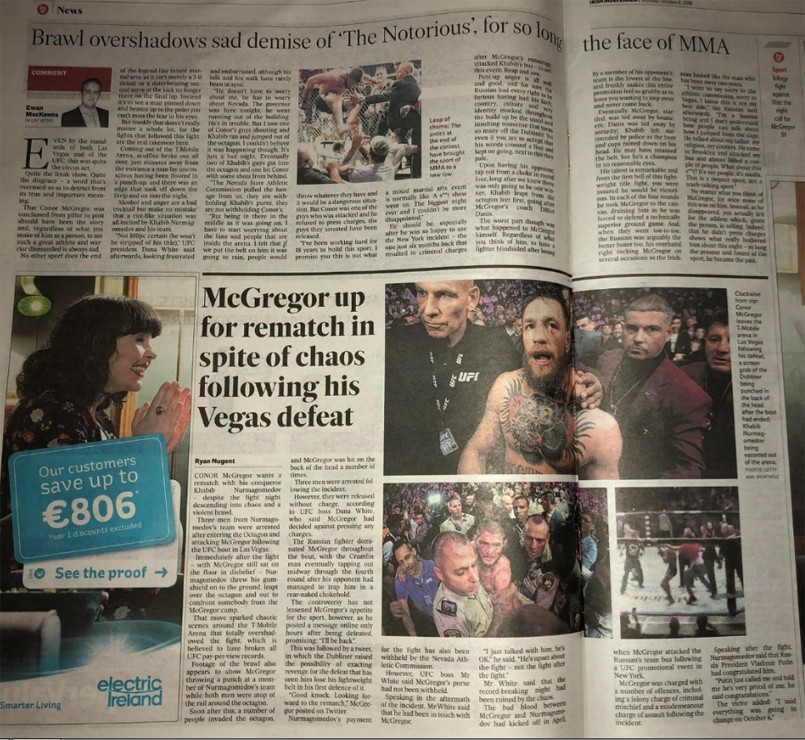 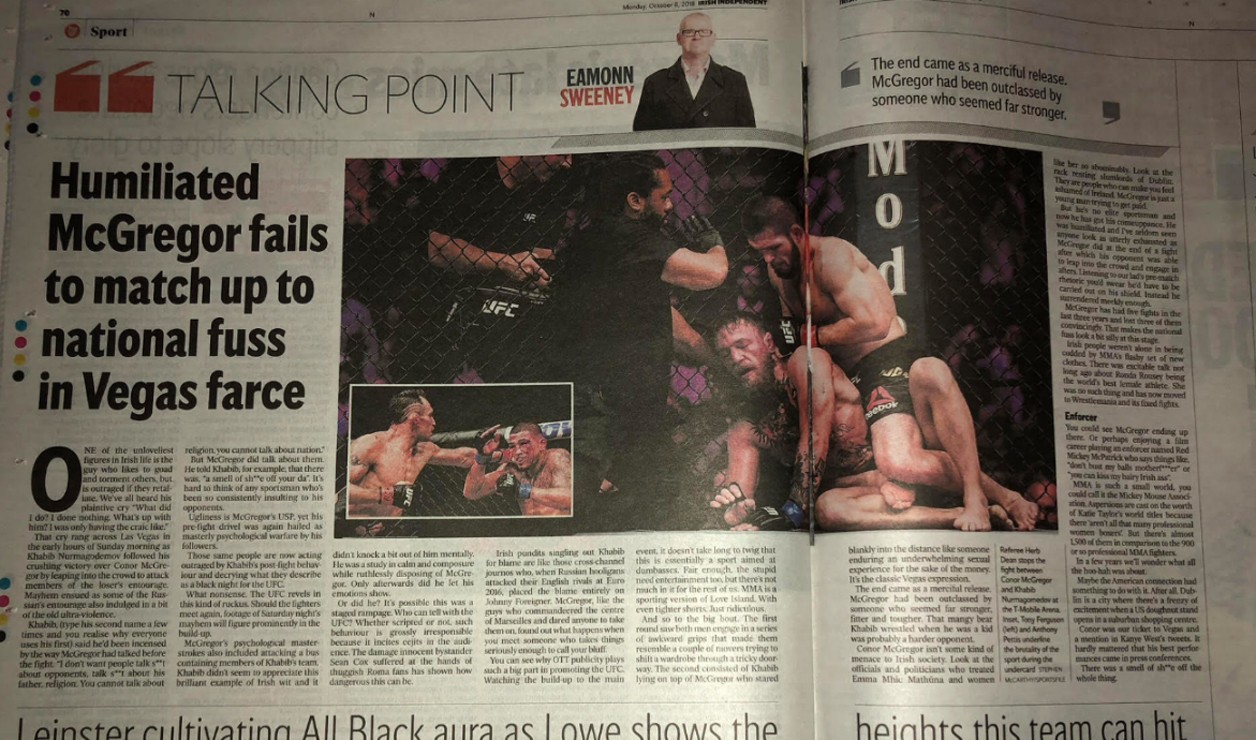 The whole page is dedicated to Khabib Nurmagomedov and Conor McGregor. In the first article, Conor is “advised” to forget about the myth of himself. The second describes the incident and the post-fight set of actions which might lead to a “lengthy hiatus”. (Philip O’Connor, Mike Coppinger) 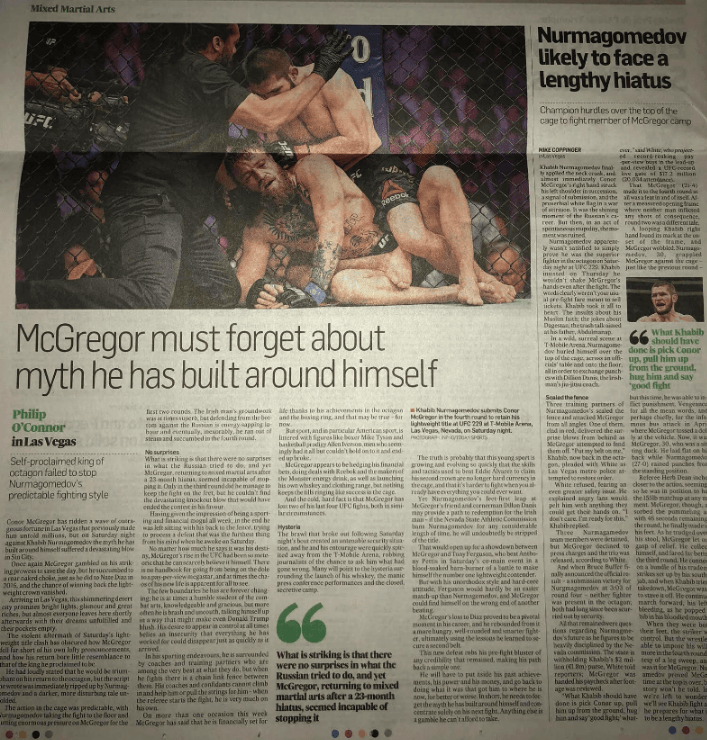 The front page of these Irish newspapers has an interesting headline – “Out of the octagon and into the UFC gutter after Las Vegas fight fiasco”. 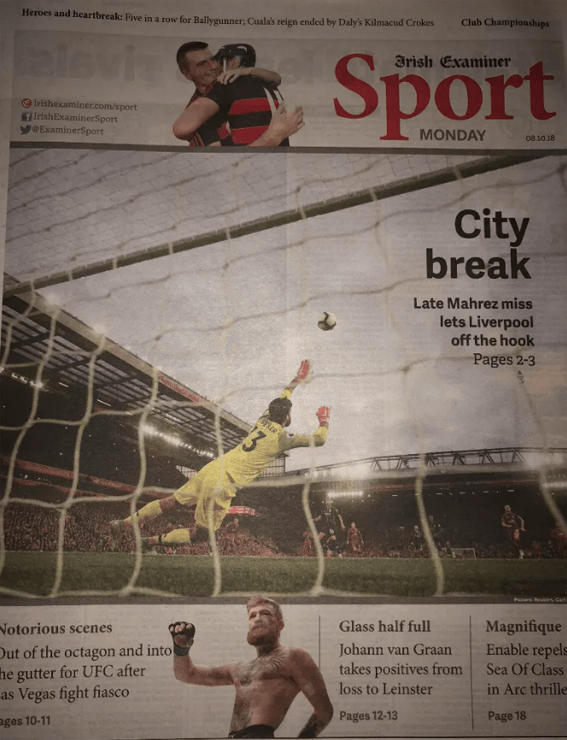 You can also read the article inside the news. UFC 229 is described as a “tawdry night”. It is also written about how UFC went into “darkness”. There are also some speculations of the potential penalty for Khabib. (Joe Callaghan, Greg Beacham) 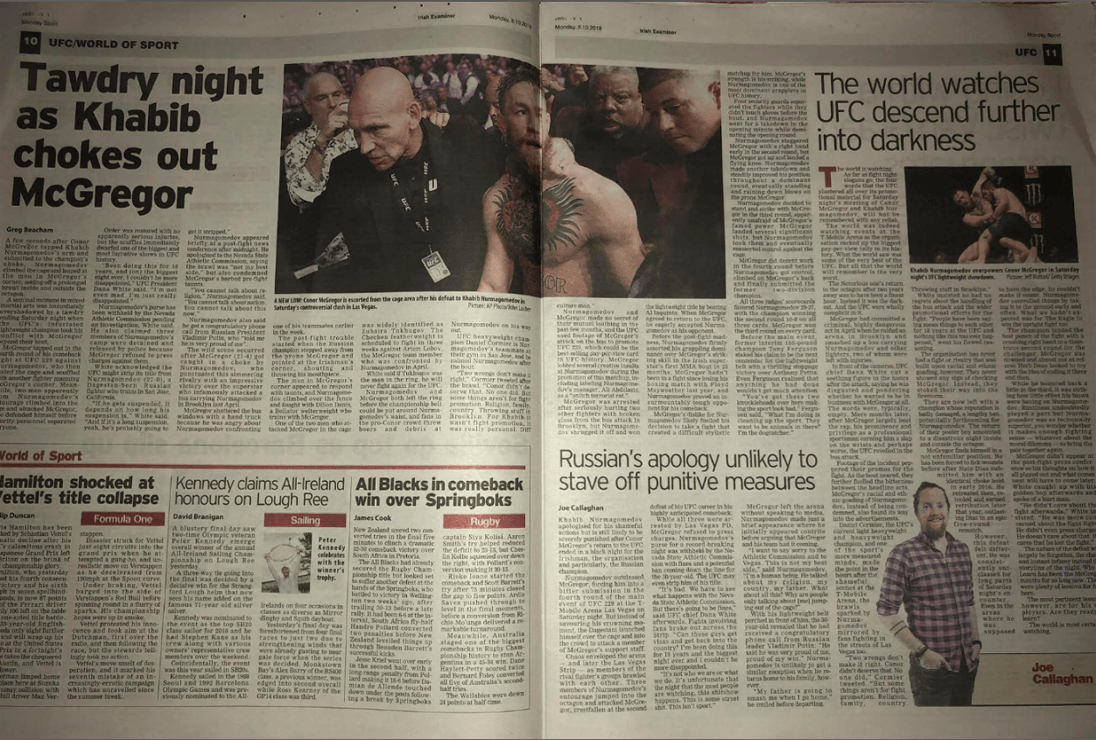 One thing is in common. Irish newspapers are very critical towards the whole fiasco. But you can’t find many articles that talk about Conor’s pre-fight insulting campaign. Did everybody forget who provoked The Eagle to go wild?