The first time I met Shannon Knapp was at the EA Sports MMA launch in Hollywood, CA back in 2010. At that time, the MMA world was still fueled by the perpetual beef between Mayhem Miller and Nick Diaz in Strikeforce. Just after his second fight against KJ Noons in Strikeforce, Diaz was walking backstage on his way to the post-fight press conference and Mayhem Miller was approaching him from the opposite direction. Just after they crossed paths, Nick Diaz threw a water bottle at him and called him a fat [expletive] due to Mayhem not wanting to go under 185 lbs to fight him. Throughout all of this, a nimble videographer filmed the entire incident. During that time, there was a rumor LayzieTheSavage was in possession of the tape and he was holding out on releasing it so that no ramifications would come to Nick Diaz. Shannon Knapp was under the same belief, so at the party I vaguely remember Knapp and Layzie taking a shot and then Knapp telling him to be a man and release the video. It was a fun night. We even shot this video of a ‘happy’ Gilbert Melendez playing himself for the first time in EA Sports MMA.

Just minutes ago, Shannon Knapp laid the verbal smackdown on some clown manager that has been intimidating other athletes to sign with their management company or they may be blackballed from Invicta FC. When the Wu made ‘Wu-Tang Clan ain’t nothing to [expletive] with,’ they were really talking about Shannon Knapp. Check out what she wrote on her Facebook page moments ago. Props to @pegson for the find. 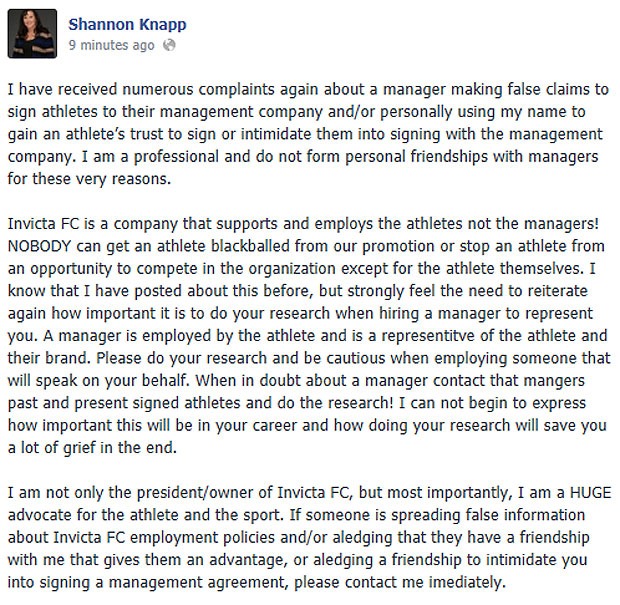 Blast to the Past: The Genki Sudo documentary in its entirety, for your viewing pleasure
← Read Last Post