In case you missed it, Dan Hardy’s dad is going off on Rumble Johnson via Twitter

Hopefully this trend of MMA parents infiltrating the world of mixed martial arts continues into 2012. I would like to take credit for it back in 2010 when KJ Noons’ dad and I nearly fought in a club in downtown Los Angeles after a Strikeforce fight. During that bizarre altercation, KJ Noons broke us up and offered to buy me a Redbull and vodka. Of course I accepted the drink, it was friggin’ KJ Noons buying me a drink. That doesn’t happen very often in society.

Thus far, Dan Hardy has not intervened in his father’s minor altercation with Rumble Johnson which started less than a day ago on Twitter. It all started when Mark Hardy responded to a video which the UFC tweeted of Anthony Johnson claiming he will ‘break Vitor’ at UFC 142. Mark replied with ‘He lies,’ and then Johnson wrote the following to Pappa Dan Hardy:

Mark Hardy gave birth to one of the most articulate smack talkers in MMA, so of course he had something up his sleeve.

Of course, no trash talk is complete without some sort of illustration to convey the point. If you want to enjoy the madness as it happens, follow both Anthony Johnson (@Anthony_Rumble) and Mark Hardy (@Mark_Hardy4) on Twitter. 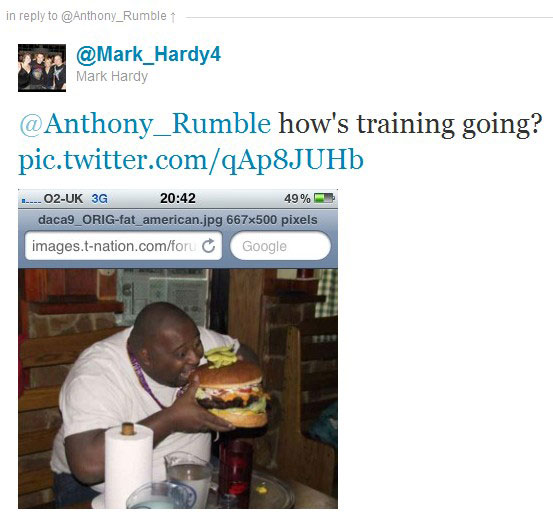 Gina Carano's voice may have been removed from the movie 'Haywire'
Read Next Post →
Click here to cancel reply.