In a bizarre twist of events, Mayhem Miller claims Ariel Helwani made him look like an idiot

Kevin James is pissed. Not because Jason Mayhem Miller had an erratic appearance and eventually walked out of his promotional interview with Ariel Helwani on The MMA Hour. Nah, not at all. According to Mayhem, it’s because Ariel Helwani made him look like an idiot on the week that his movie ‘Here Comes the Boom’ premieres. Come on, everyone can logically deduce that. It’s simple.

In a sense, the more we talk about Mayhem Miller’s confusing appearance on The MMA Hour, the more we can remind you that ‘Here Comes the Boom‘ comes out October 12th in a theater near you. It’s the least we can do for the director of the film, a guy nice enough to grant us an interview without running away or doing something bizarre. In other words, Frank Coraci didn’t pull a Mayhem — and MiddleEasy didn’t make him look like an idiot on the week ‘Here Comes the Boom’ premieres. Unlike Ariel Helwani, according to a recent tweet by the former Strikeforce/UFC middleweight. 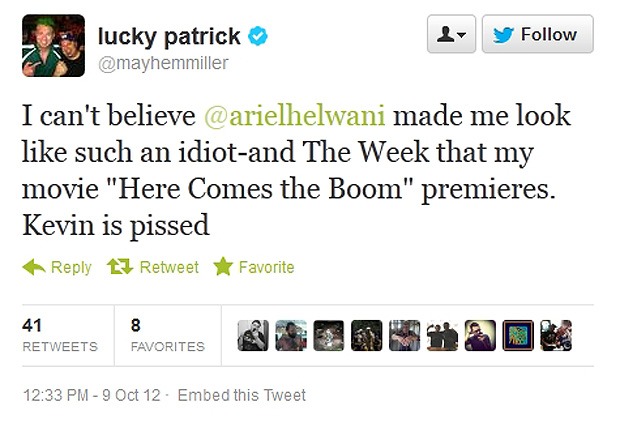 If you have anxiety and depression, Jens Pulver can give you a lift
← Read Last Post