Ilima Lei-Macfarlane Put On A Great Performance Tonight, She Remains The Flyweight Champ

The referee in charge of this contest is Jason Herzog. The main event of the evening has just started!

No glove touch. Middle kick Jackson. 1-2 Ililma, the fighters clinched up. Jackson is pressed against the fence, Ilima has both under-hooks in. Great trip by Lei-Macfarlane, she ends up on the top.

Good butterfly guard by Kate Jackson. She is trying to shake Ilima off. Ilima lands punches off the top, but Jackson fires back with hammer-fists off the bottom. Macfarlane is in the half-guard, she drags her foe towards the fence, but Jackson gets up. Ilima has a chance for choke attempt. Knees.

Jackson blocks the knees, but she is bleeding. Trip attempt, Jackson remains on her feet. Great reversal by Kate, she lands and elbows and controls her back. Now Lei-Macfarlane is pressed against the cage. The crowd chants for the Hawaiian fighter. More elbows, wonderful exchange at the end of the round. 10-9 Lei-Macfarlane.

1-2 Ilima, quick strikes. The low kick missed. Jackson lands to the body, Ilima fires back. Kate is missing over and over.

Strong low kick. Big punches by Macfarlane, she clinches up. Jackson defends the trip but Ilima presses her against the cage, great reversal by Jackson, she has both under-hooks in. Elbow. Jackson keeps pushing Ilima.

Knee to the belly. And another one. Macfarlane’s nose is bleeding too! This turns into a bloody and battered war. Jackson works off the clinch. Ilima reverses her, and a great takedown.

Strong elbows off the top Macfarlane. This is dangerous, Jackson is bleeding even more. Ilima is attacking Jackson’s right arm, good defense. Great transition by Macfarlane to north-south, she attempts the submission, but Jackson is saved by the bell. 10-9 Macfarlane.

Elbow. Another elbow to the body. Jackson’s feet are covered in blood. 10-9 Jackson.

The championship round starts. Clinch and right uppercut for Macfarlane. Great takedown, but even better sweep by Kate Jackson. Ilima rolls and ends up on the top again.

Jackson’s butterfly guard is outstanding, she is trying to get back on her feet. Ilima is again on the top, she trapped Jackson’s right leg. Jason Herzog wants more action. Right hand Ilima. Herzog is losing his patience, he warns fighters again.

Lei-Macfarlane lands more right hands. Jackson defends we, misses with an elbow. Good roll by Jackson, Ilima could go for D’Arce choke, but she lands knees to the body. Now she takes Jackson’s back, she sits very high.

MacFarlane focuses on Jackson’s right arm. Both fighters roll, this looks dangerous. Jackson is trying to save her arm, she rolls clockwise but Ilima doesn’t give up. Kate Jackson continues rolling and the bell rings. 10-9 Macfarlane.

The last round kicks off. Fighters trade jabs and low kicks. The crowd chants for Ilima, but she misses wide. Low kick miss Jackson.

Jackson retreats and circles. Clinch. Lei-Macfarlane has one under-hook in. Knee to the belly. Great reversal by Kate. But Macfarlane takes her down and mounts her. Ilima could go for a stoppage. Big punches to the head! She delivers brutal elbows and punches off the top. 10-9 Macfarlane.

The champ and the challenger came to blows at the end of round one. 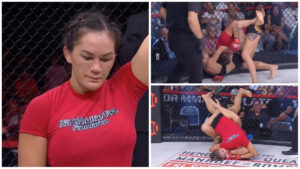 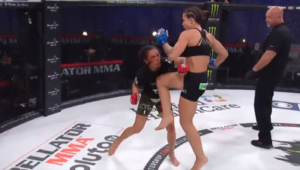 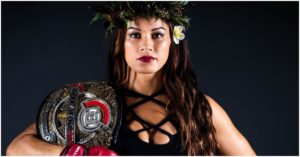 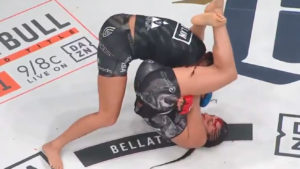 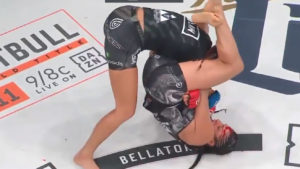 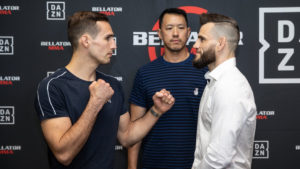 How To Watch Bellator 220 “MacDonald Vs. Fitch” Live Stream