If you want to receive a FREE box full of One FC schwag, read this

One FC is just around the corner, peeking down the hallway and taunting you with a plethora of head kicks. September 3rd marks One FC’s inaugural show into the wonderful world of MMA and it features a card built for Pride FC rules. By now, you’re well aware of the monumental impact One FC will have one the MMA scene in Asia. I’ve even compared it to One FC holding the Infinity Gauntlet, and many of you simply could not grasp it. Shame on you. You should have read more Marvel comic book series. It’s not my fault that your parents didn’t drop you off at comic book stores after school to ‘get rid of you’ for hours on end. That’s love right there.

Now it’s time to give away a box full of One FC schwag. We’re talking about stuff that you can’t even get on the North American continent. Why? Well, because you’ve made the intelligent choice by reading MiddleEasy on a daily basis. Here’s what’s in the prize package:

Now the only thing you have to do to enter is write what you would like to see in One FC in the comment section below. Want to see Lenne Hardt be the announcer? Write it below. Pits of fire surrounding all future events? Put it in the comment section. The greatest idea will win this box of goodies, and the contest is open to anyone in the world. We don’t discriminate because we can’t speak your native language.

You have until 11:00 pm EST on August 30th 2011 to write your suggestion in the comment section below. Your package will be shipped the next day. Now hurry, and don’t forget to watch One FC live on Sherdog this Saturday! Here’s a glimpse of what you will receive.

Update: And the winner is: El Capitan TummyStix

“It would be nice to see a Production worthy of the Warriors you have on the Card! Great Ring Entrances, Great Announcers(Lenn eHardt), Great Commentators (The Voice at LEAST), Great Interviewers, Great Spectacle (Show Production/Entrances) again. In terms of the Show:
– 5- 3 Minute Rounds (in order to ensure that they Fight to Finish from Bell to Bell)
-PRIDE Rules (Stomps, Soccer Kicks, Elbows, Etc.)
-Great Referees equipped WITH YELLOWCARDS to prevent Jackassery
-Great Judging (Former Fighters ONLY)
-Judging PRIDE Style (Based on Fighting for the FINISH & DAMAGE, no “Takedowns w/ 30 Secs left & you stole the Round”)
-Take care of the Competitors!!” 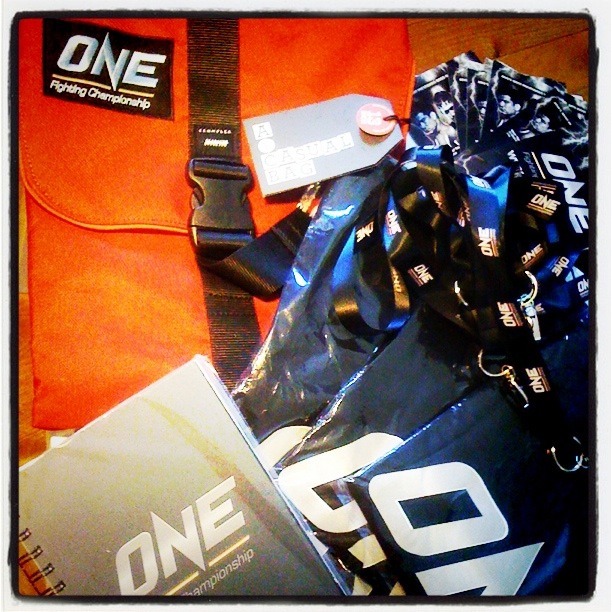