If riddum was ‘the force’, GSP would be a Jedi Master 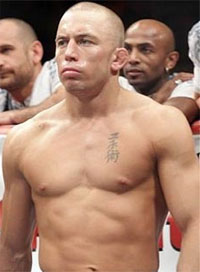 Under Armour must be loving this right now. GSP dominated Dan Hardy in a five-round unanimous decision that mainly consisted of Georges St. Pierre on top of Hardy. If you didn’t watch the fight, just go to your nearest cafeteria and ask for pasta with meat sauce. Now imagine the meat sauce is GSP and Dan Hardy is the pasta. Ask the cafeteria lady for extra meat sauce and that’s pretty much the entire fight. Crazy amount of meat sauce on top of a little bit of pasta.

You got to give it to Hardy, dude was definitely aiming for the knockout with each hook he launched at GSP french-Canadian’s dome piece. Unfortunately, none of them connected exactly the way Hardy planned and with each effort, GSP’s riddum got the best of Dan with a potpourri of single and double leg take downs. It looked like things were pretty cordial afterward after Hardy raised GSP’s hand at the end of the fight. After tonight, it makes you wonder what welterweight out there has a better ‘riddum’ than Georges St. Pierre.

Props to Dan Hardy for training with Gumby prior to tonight and even bigger props to GSP for earning another chapter in the mixed martial arts history book (hopefully, MiddleEasy will get a footnote…somewhere).