If Dynamite!! 2010 happens, it may not be televised 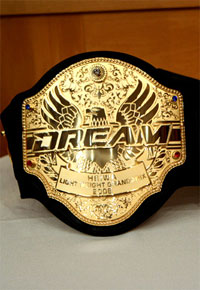 I fell asleep writing this article only to wake up with my hands covered with ulterior motives. It was alright, I washed them off with soap so now all my thoughts are steady. At least, steady enough to say that no one knows what’s going down at Dynamite!! 2010. Only one fight is listed on Tokyo Broadcasting System’s website, and according to Zach Arnold from FightOpinion, that should disturb every Japanese MMA fan.

If a TV deal falls apart, the smart solution would be for K-1 to cancel the NYE event and either stay on the sidelines or work with Sengoku for their Ariake Colosseum event. (Who would have ever thought that this would be a possibility?) Given that a month ago K-1 tried to portray itself as a ‘big brother helping out a little brother’ by offering to work with Sengoku for their 12/30 Tokyo event, it would be a major loss of face if K-1 canceled the Dynamite event. Which is why, in the end, it’s likely the show will go on in Saitama even without television. This is all about saving face and maintaining image even with a steep price tag. Understand that K-1 needs momentum and something positive to point to in order to maintain their ties with both Fuji TV and Tokyo Broadcasting System. If Dynamite bombs, their future on network television will be shaky.

The stress is enormous right now on K-1’s staff. They have their 12/11 Ariake Colosseum event for Fuji TV that they need to sell tickets for. So far, the primary focus for promotional operations this week has been for the Ariake show. It’s going to be tough for K-1 to sell out that event. Now, combine that with the fact that they are in a terrible position going into the Dynamite show with little or no momentum and something has to give.

Fair play to Sengoku. Back in July, Sengoku executives claimed that they would take over the Japanese MMA market by ‘waiting for Dream to destroy itself’. It marked perhaps the first time in history where an MMA organization relied on entropy to dominate a market — and with multiple reports of Dream in severe financial trouble, it looks like it may be working. [Source]