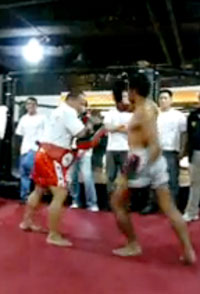 Have you ever wanted to see the world’s largest animatronic performance and then get in a golf cart to go see an MMA match in Singapore? Now you can! Just don’t try to bungie jump, that’s illegal. Just off the southern coast of Singapore on an island filled with theme parks, lush rainforest gardens and the worlds largest oceanarium lies Resorts World at Sentosa, the new home of the “MMA revolution of Asia“, or so claims Chatri Sityodtong, Singapore’s version of Scott Coker (not quite Dana). Chatri has trained at the world-renowned Sityodtong muay thai gym, holds an MBA from Harvard Business School and his girlfriend can cook (and she’s hot). Credentials aside, the guy is bringing MMA to the masses at The Resorts World at Sentosa’s six billion dollar facility. Chatri will showcase his Evolve fighters to the world for the foreseeable future:

“We blew through our three-year financial goals in three months, so there’s strong interest in Singapore”

“We are at the beginning of the MMA revolution in Asia.”

Sityodtong will be heading up next year with the launch of “Martial Combat”, a series of MMA events to be broadcast across 24 Asian countries by ESPN Star Sports, featuring what looks to be some hard hitters. [Source]