How To Live Stream UFC On ESPN 3

UFC is returning to the business tonight (Sat., June 29, 2019) with UFC on ESPN 3 MMA event from inside the Target Center in Minneapolis, Minnesota. The main headliner features a knockout artist Francis Ngannou and a former UFC heavyweight champion Junior dos Santos.

The 35-year-old dos Santos is currently riding on a three-fight winning streak over the likes of former title challenger Derrick Lewis, Tai Tuivasa and Blagoy Ivanov. Ngannou meanwhile, is coming off a first round KO win over Cain Velasquez.

In the co-headliner, Joseph Benavidez and Jussier Formiga will clash in a Flyweight showdown. Formiga has won five of seven overall, and Joseph has won eight of nine. The winner hopes to challenge Henry Cejudo for the flyweight title in 2020.

That’s not the end lets roll over who else is fighting in the card. Demian Maia recently snapped the three-fight skid with a submission win over Lyman Good earlier this year. Maia will try to pull a win when he meets Anthony Rocco Martin.

ESPN broadcasts the entire UFC Minneapolis fight card. The “Preliminary’ matches begin at 6 p.m. ET while the main card will start at 8 p.m. ET, on ESPN as well.

Check out below UFC On ESPN 3 fight card and results:

Bad intentions in every shot!

RT b/c it's FIGHT DAY❗️#UFCMinneapolis gets started at 6pmET and goes all night on @ESPN! pic.twitter.com/dxqHwI8VYb 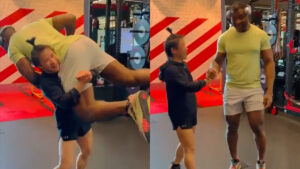