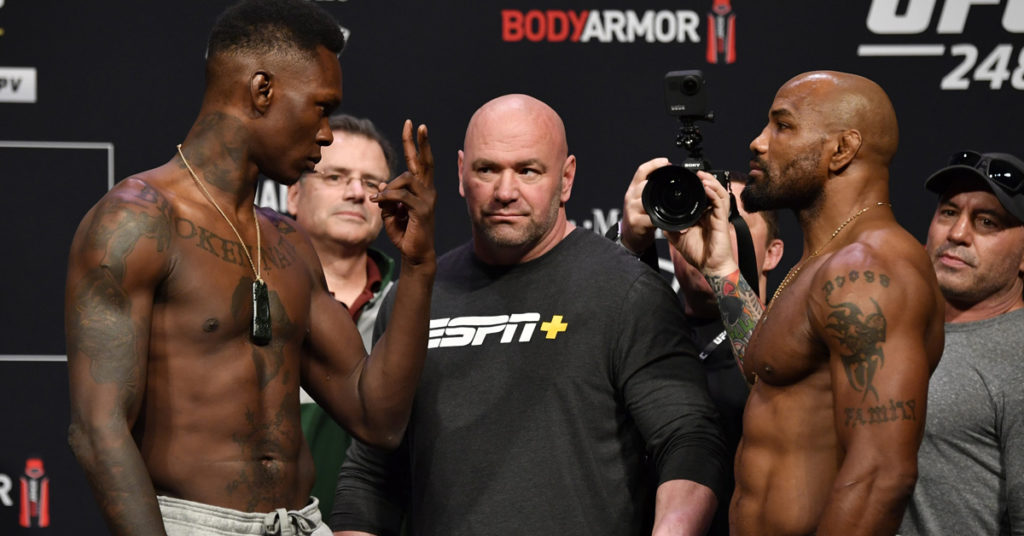 Adesanya has amassed an undefeated (11-0) in his MMA career and signed with UFC back in 2018 ever since he continues to fly high. After winning his first five fights in the promotion, “The Last Stylebender” went to fight for interim UFC gold, where he defeated Kelvin Gastelum at UFC 236 in April 2019. Six months later, he went on to unify the title after knocking out Robert Whittaker at UFC 243. Today he will face a stiff challenge in Romero.

Romero at age 42 itching to get a UFC gold, and if he wins the title, he will become second oldest fighter to win a gold at this age as Randy Couture holding that record at age 43 when he busted Tim Sylvia at UFC 68 back in 2007.

Chinese fighter Zhang is riding on a 20-fight win streak and hasn’t tasted loss since her debut back in 2013.

Joanna is the reigning champ ever at 115 pounds, but after her consecutive losses to Rose Namajunas, she got a chance at the vacant flyweight title after earning one win over Tecia Torres, which she dropped to Valentina Shevchenko.

Also includes in the main card, Beneil Dariush will meet Drakkar Klose in a lightweight affair, Neil Magny faces Li Jingliang in a welterweight bout and Alex Oliveira squares off against Max Griffin in a 170lbs showdown as well.

Check out below UFC 248 fight card and results:

Reporter Responds After Getting Shut Down By Tony Ferguson At UFC 249 Press Conference
Read Next Post →
Click here to cancel reply.