UFC 225 is set to go down this Saturday night (June 9, 2018) at United Center in Chicago, and the main card airs on pay-per-view (PPV) following prelims on FS1 and UFC Fight Pass.

In the main headliner, UFC middleweight champion Robert Whittaker and Yoel Romero will square off in a non-title bout after the “Soldier of God” failed to make a 185-pound limit on Friday. The Co-headline features Colby Covington and former lightweight champion Rafael dos Anjos fight for an interim welterweight title, possibly the winner next in line for Tyron Woodley.

Check out UFC 225 full fight card, time and results below:

Chris de la Rocha Def. Rashad Coulter via TKO (punches and elbows) at 3:53 of Round Two.

Anthony Smith Def. Rashad Evans via KO (knee) at 0:53 of Round One

Charles Oliveira Def. Clay Guida via submission (guillotine choke) at 2:18 of Round One

Dan Ige Def. Mike Santiago via TKO (punches) at 0:50 of Round One 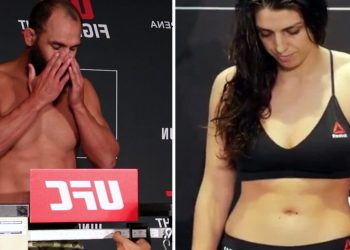 The Most Dangerous And Worst Weight Cuts In UFC History

Anybody who watches basketball knows what time it is when dealing with a 15 year NBA veteran in J.R Smith....