We could only wish Fedor, Anderson Silva and other superhero GOATs of MMA could’ve joined forces with the citizens of the east coast to combine their collective powers and uppercut Hurricane Sandy away from from New York, New Jersey and everywhere else that was hit by the devastating storm. Unfortunately, the MMA version of The Justice League (or Captain Planet) doesn’t exist (yet), and Hurricane Sandy nailed the shores of Jersey and the New York metropolis causing extensive damage and taking the lives of over fifteen human beings thus far. The breadth of the damage is huge, and our hearts go out to all of the MiddleEasy readers affected by the storm. MiddleEasy Fantasy Football champion and comment of the year award winner King Tico; if you’re out there, let us know if you’re OK, man.

Chris Weidman and his family are safe, but apparently his home was destroyed by Hurricane Sandy. Ryan Bader revealed this to the world via his Twitter. 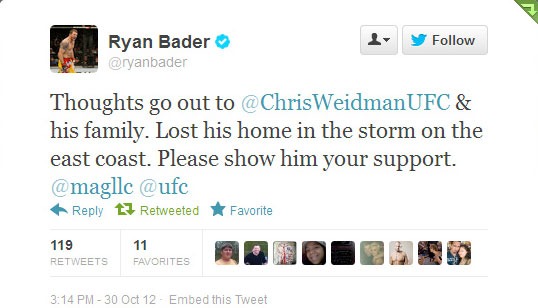 And props to Gary LapLante for pushing carts and releasing safety PSA’s in the killer winds.