Nate Diaz always keeps it 100. Part of the Diaz Brother’s charm is that they are who they are and won’t change for nothing. A shining example of the younger Diaz brother going Full Diaz is the now infamous UFC 202 presser water throwing bottle standoff.

The result of some good old fashioned Stockton fight promotion was a $150,000 fine and 50 hours of community service handed down by the Nevada Athletic Commission to Conor McGregor this week. 150 Gs? Two days worth of community service? For some water bottle long toss?!?! We all know the NAC is a money hungry government run agency but what will happen when Diaz steps in front of the commission to hear his penalty?

Diaz is not pleading the fifth. Nate Diaz walking down the NAC with his legal team and he may have a chance to get a lesser penalty than McGregor if everything goes according to plan.

“Despite the mysterious and uncertain punishment the NAC is seeking, Diaz’s legal team has chosen to admit wrongdoing and seek leniency. This strategy is one that has paid off in the past as those with experience before the NAC can attest to. Unless there is strong legal and factual foundation against discipline admitting wrongdoing and pleas for leniency tend to resonate with the NAC. Diaz apologizes, notes no injury arose from his actions, expresses regret and asks for leniency. A strategy which hopefully will pay off for the fighter.” 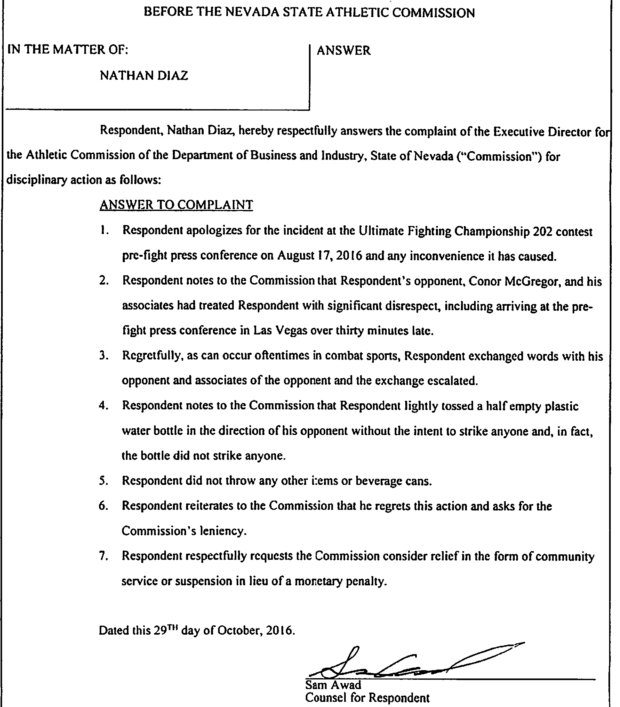 Video: Ex-WWE star Ryback is hitting pads and he's a mix of CM Punk and a young Dada 5000
Read Next Post →
Click here to cancel reply.