In that banner picture, it appears that Anderson Silva is casually giving the security guard a right hook as he strolls to the cage against Chael Sonnen at UFC 148. It’s as if Anderson said ‘Good job, playa. Now take this right hook as payment for your excellent security work.’ It was probably a great honor to be punched by Anderson Silva that day in Las Vegas. That security guard made his father proud. One day even you will follow in the footsteps of this unknown security guard and get pseduo-punched in the face by the greatest fighter in MMA history.

This time tomorrow, you will be hunched over a computer looking at the UFC 153 prelim Facebook fights while multi-tasking a variety of things on your internet browser. It’s something we all do when confronted with the opportunity to make our lives even more confusing than what it already is. But enough about you — let’s get on to the UFC 153 weigh-ins before you tell me how you had a repressive childhood and your parents didn’t pay enough attention to you.

Check out this pic from Esther Lin of Anderson Silva squaring off against Stephan Bonnar in Brazil at the UFC 153 weigh-ins which happened just moments ago. Also, +500 for anyone that can guess the sponsor on the front of Bonnar’s fight shorts. 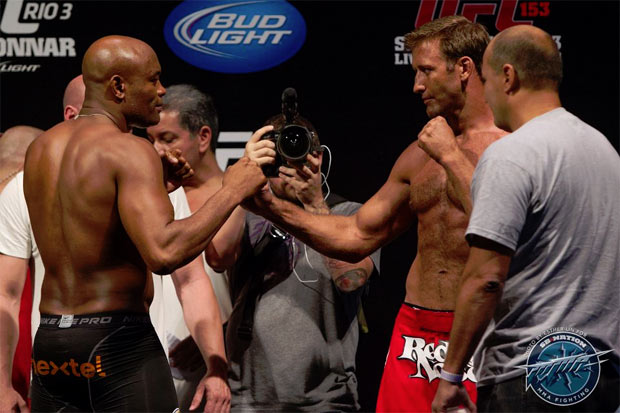 Russian coach drops his student with one punch, kicks his body aside, and continues to teach
← Read Last Post