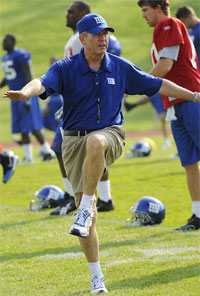 Zeus and I have a shared roommate named OB who could be the worst fantasy football player known to man. This year he drafted the wide receiver tandem of Sidney Rice and Vincent Jackson. One player was confirmed injured for the first half of the season and the other was suspended indefinitely. You don’t have to know the game of fantasy football very well to know you can’t draft 20% of your offensive team and expect them not to play the first half of the season. OB, as expected around the league, came in last place. If we organize an official MiddleEasy Fantasy Football league next year, OB will be involved so everyone else can make the playoffs easier. I did pretty well, I’m playing for third place this weekend. I had multiple New York Giants this year. Brandon Jacobs, Steve Smith and Ahmad Bradshaw were on my squad and they did solid job, they always seemed ready to play hard — just for me. With championship week in fantasy leagues across the nation upon us, pride, egos and hundreds if not thousands of dollars are on the line. Little did I know my Giant trio this season were shown clips of MMA by head coach of the Giants Tom Coughlin to get pumped up before games.

“He’s shown some good fights, guys getting beaten up pretty good,” tight end Kevin Boss said. “I didn’t even know if he was sure U.F.C. was in existence.”