Don’t want. Don’t want any of it. We have no idea who Harvey Park is but we suddenly really respect his finger.

Over the weekend Park competed at LFA 53: Royval vs. Kenney on AXS TV. There was a time when MMA fans were craving any little crumb of MMA content. HD Net, now AXS TV, gave us our fix every Friday night with regional cards and new episodes of Inside MMA. Now it’s 2018, UFC Fight Pass has taken over the regional MMA scene and it’s really easy to find fights online 24 hours a day.

So to see that AXS TV and Friday nights is still chugging along is pretty cool. With late night local MMA cards comes weird fight endings and injuries. Strange stuff goes on week in and week out in the UFC but nothing compares to your random regional MMA cards every weekend. Just dial back the skill level of the fighters, organization of the promoters and competence of the referees/judges from your weekly UFC card and boom you got local MMA.

Somehow, someway the hero of our story, Harvey Park badly fractured his finger during his three round lightweight tilt at LFA 53. Like really messed it up. On the that “oh my God how is he still walking, let alone fighting” scale, Park broke the matrix. Make this 17,579 reasons why pro MMA fighters are just not built like the rest of us.

The next time you get a paper cut and want to tap out? Remember Harvey Park’s finger and the fact that he fought and won a decision versus Le’Ville Simpson at LFA 53. 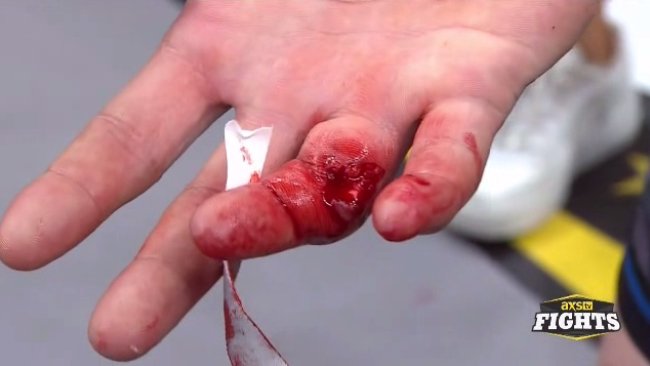 H/T to the great @Grabaka_Hitman for the find