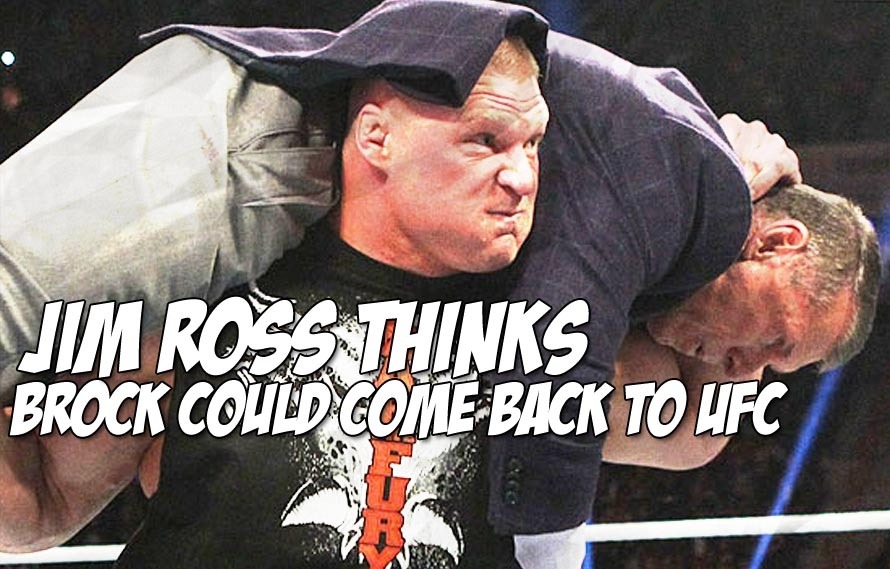 FacebookTwitterFlipboardRedditWhatsAppPinterestLinkedIn
There are only a few ways you can properly celebrate the month formerly known as October, now called Brocktober, since about 2010. Massive party subs from a Brock Lesnar approved sandwich distribution center, handing out Brock Lesnar shaped beef jerky rather than candy on the 31st of Brocktober, and begin speculation that the former UFC heavyweight champion is headed back to the Octagon. I mean Brocktagon.
Currently the WWE World Heavyweight Championship, reports have surfaced that Lesnar’s latest WWE contract runs out after WrestleMania 31 next April. Three years removed from his last UFC fight and now 37 years old would the always unpredictable Lesnar once again take a hard left turn in his combat sports career path?
Legendary BBQ sauce lover and pro wrestling/MMA play-by-play man Jim Ross gave his take over at Fox Sports.

“Creatively from a strategic standpoint, WWE will need to find out sooner rather than later if Brock is interested in re-signing or not.”
“I see no reason he couldn’t have the potential to return to the UFC and sell pay-per-views.”

While fans sit at home trying to recreate Lesnar’s chest tattoo into their Brocktober Jack-O-Lanterns, the Beast Incarnate has earned himself a ton of negotiating leverage. Lesnar could resign with the WWE and keep his flexible schedule of TV appearances. Lesnar could be the returning hero to the UFC and fight twice a year for huge payouts. Or the former NCAA Division I heavyweight wrestling champion could grow his beard out and retire to the open ranges of Minnesota.
Undertaker streak breaker, UFC box office savoir or meat-eating viking, Lesnar is a man with options. Mostly animal flesh and large bags full of money based options, but options nonetheless.
For more MMA News, Rumors and Updates follow the Red Monster on Facebook, Twitter, YouTube and Instagram
FacebookTwitterFlipboardRedditWhatsAppPinterestLinkedIn
Robin Black breaks down his top 3 kills in Bethesda's Evil Within
← Read Last Post