It’s not often you wake up in the morning and hear the words ‘MMA fighter’ on Good Morning America. Actually I don’t even know if that statement is anywhere near true. I normally don’t watch Good Morning America so Robin Roberts and George Stephanopoulos could be hosting five minute mma technique clinics every morning for all I know. What I do know is I was running late for work this morning and just as I was about to turn the TV off and run out the door, I heard the words ‘boxer and mma fighter’ so naturally I stuck around a few minutes longer to find out what and who they were talking about. As you can tell, I’ve got my priorities in check. What’s another 5 or 10 minutes when you are already going to be late anyway?

The story I flaked out on work to check out goes on to discuss a woman named Brittany Martinez who allegedly tried to hire her ‘friend’  Stephen Rowland to commit murder for hire upon her firefighter husband. It turns out, Rowland is also a ‘boxer and mma fighter’ from Houston Texas. After searching around a bit on the net I wasn’t able to verify Good Morning America’s claims that Rowland is an ‘mma fighter’ but according to his facebook he wears some pretty snazzy yellow boxing gloves in his profile picture, hurt his hand the other day in training and appears to at the very least trane UFC at a place in Houston he refers to as ‘the hive’. Here’s a screenshot of Rowland’s facebook page: 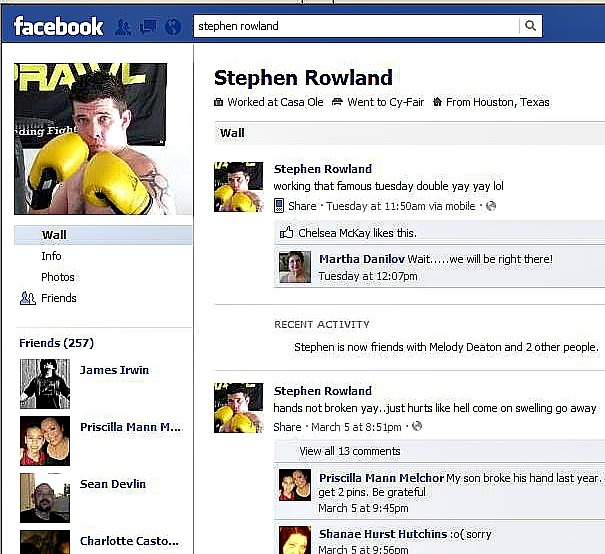 That’s about all we know about this mysterious UFC traneing guy at this point. As the story goes, Martinez allegedly offered Rowland a measly $2000 in total to off her husband. Rowland apparently took an intial $500 cash deposit and instead of finding a hitman for Martinez, he did the right thing and contacted the police. Death plotting bored suburban housewifes beware-don’t try to hire guys that trane UFC to kill your husbands. You never know when someone with the morals of Stephen Rowland will be there to foil your evil plans. If you want to check out the full official criminal complaint against Brittany Martinez including the details of her contact with super UFC traneing guy Stephen Rowland, you can check it out on foxnewshouston.com.  [source]