Gregor Gracie’s Full MMA Game to be Tested Against Adam Kayoom at ONE FC: Destiny of Warriors

At One FC: Destiny of Warriors the world is primed to see Gracie Jiu-Jitsu invade the One FC cage once again, but it faces a tough challenge by the way of a Muay Thai fighter with a strong jiu-jitsu game of his own. Gregor Gracie will enter the cage on June 23rd with the whole lineage of Gracie Jiu-Jitsu behind him as he is set to do battle against a hometown Malaysian fighter who specializes in muay thai, Adam Kayoom. Kayoom, though, is also an accomplished jiu-jitsu practitioner in his own right, and has a lot to prove against Gracie. 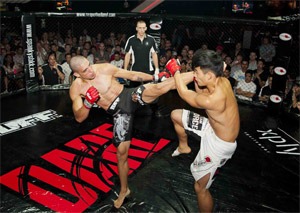 The Gracie name is one that is synonymous with Mixed Martial Arts, with the beginnings of the Ultimate Fighting Championship in the United States as the brainchild of the Gracie family to help promote Gracie Jiu-Jitsu as the strongest form of fighting in the world. The UFC has grown a lot since then, as has the Gracie family and the art of jiu-jitsu. Gregor Gracie is one of the latest in a long line of fighters to bear the Gracie name, the half brother of Rolles Gracie, Jr. and Igor Gracie, and is looking to be a success overseas in Asia. Gregor trains with Renzo Gracie and serves as an instructor at Renzo’s school in New York. In the world of MMA, Gregor’s jiu-jitsu is some of the most feared, as he has trained some of the MMA world’s best grapplers.

With one victory already in One FC, he looks to secure his second victory against a very tough Adam Kayoom. Kayoom’s MMA record might be a bit bare at 2-1, but his fight career dates back almost fifteen years. Kayoom began his career training in muay thai before he became enamored with jiu-jitsu, traveling all the way to Brazil to learn the art of grappling. Kayoom divided his time between competing in grappling tournaments while still fighting in muay thai to make money. Until recently he split his time between the two, but has decided to turn his full attention to Mixed Martial Arts with One FC as his home.

Kayoom has even taken his training to the next level, working with American Top Team Phuket and Phuket Top Team in Thailand on his MMA game. While a fighter with the muay thai credentials that Kayoom has might seem like he favors standing, his two MMA victories are by way of submission, proving that he likes to mix it up and is comfortable on his feet and on the ground as well. He brings a well-rounded game with him, and on June 23rd when he enters the One FC cage in his home of Malaysia he’ll be looking to pull off a huge win over a member of the world-famous Gracie family.

Gregor Gracie’s MMA game will be tested against Adam Kayoom on June 23rd, as he’ll need more than good jiu-jitsu when he squares off with the well-rounded Kayoom. Gregor Gracie has already tested his skills in the One FC cage, but this time, at Destiny of Warriors, he’ll face a fighter whose diverse skill set and hometown fans will give him an advantage. One thing is certain, that both men are facing the biggest challenge of their respective careers and will do battle at One FC: Destiny of Warriors.