Gilbert Burns was scheduled to fight Kamaru Usman in the main event of UFC 251 and kickstart fight Island. After a knockout win over Demian Maia, the Brazilian fighter earned his spot as the number one contender with a dominating performance against former welterweight champion Tyron Woodley. Unfortunately, the fight had to be canceled after Burns and his two cornermen tested positive for COVID-19.

💔 devastating news, not feeling well but I’m going to win this battle! Stay safe out there! Much love 🙏🏾 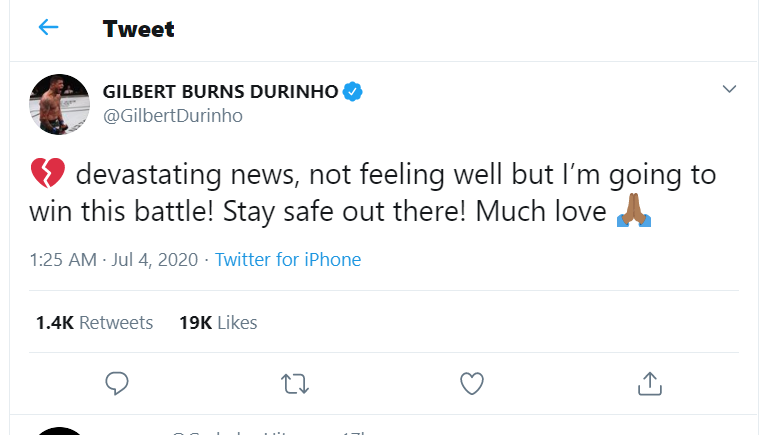 Fortunately, his brother Herbert Burns seems to be healthy as he reported himself on his Twitter account.

I just want to make it clear that my COVID-19 tested came out NEGATIVE!
I HAVE NEVER TESTED POSITIVE!
I'm healthy and well.
Thank you for the messages!
🙏🏾

With Burns out of the fight, reports of Colby Convington and Jorge Masvidal stepping in to replace him flourished, considering the fighters’ reaction to the news. However, it was confirmed that Alexander Volkanovski vs Max Holloway would replace the welterweight title fight as the main event of UFC 251.