The Ghost of UFC 177: Joe Soto Goes Down, Jensen’s Redemption

What follows is the final transmission that MiddleEasy has received from Jensen Woods, Ghost Hunter. We’ve attempted to re-establish contact with Mr. Woods, but been unable to. Mr. Woods was hired to investigate the ongoing slowness surrounding MiddleEasy.com throughout the past week as well as strange happenings reported surrounding UFC 177. He went right to the source. We salute him.

I’ve been informed that the Ghost of UFC 177 has reached a point of awareness, that it understands. I’m torn. This entity is screaming out to us, trying to tell us something, to teach us a lesson maybe? But it is not of this world, it is indeed a ghola, ready for its programming to kick in and to harm us, to destroy us. The happenings tonight are proof enough. UFC 177 must be stopped, should have never happened.

The Old Ones are behind this, I’m sure of it. They also have my dearest Esther, holding her hostage. UFC 177 is an allegory in this tale, it was never meant to be. I’ve felt a presence all night, seen the blank stares from those in attendance. They aren’t here, none of this is. The Sleep Train Arena was never intended for such things, never intended to be a gateway to the darkness, a gateway to Carcosa.

You heard it, didn’t you? You heard them mention “Barboza.” They are afraid, afraid to tell us the truth, to tell us about Carcosa. It’s coded, it’s an ancient, runic SOS. The loudspeakers are blaring “TURN DOWN FOR WHAT” without there ever being an answer. Could there be?

The night that Esther was taken from me she had good news, she was hurrying home to tell me of her day. Her day was like any other, but she had gotten the recognition that she so wished for. The years of work, of research, it would all pay off when she received that grant. Our lives were to change forever, which they did. I wept when the phone rang, knowing that things would never be the same again. I felt a chill move through my bones, inhabiting my very essence. I knew that it was Esther, I knew that she had passed.

Abominations have no place in this world. They lure you in with sweet nothings, promises of Harley-Davidson motorbikes or the loving embrace of testosterone-junkie bald men. But no, man! We must resist! We must resist the serpent’s kiss! How can one miss the news, how can one not see that the inclusion of “Ferguson” on UFC 177 was an omen? A dark omen. As dark as the abyss that we have found ourselves as a people in.

I’m overwhelmed with emotions, hyper aware of everything in the vicinity. A popcorn vendor sighed, shaking his sullen head. They are onto me. Dear god don’t let them see me. I fumbled in my pockets for my holy water, sprinkling it over my forehead. I wondered if I were to bathe the popcorn vendor in it if he would burn, if he’d scream like the demons I’ve heard in the past. A drop sizzled across the floor. My heart skipped a beat.

The Ghost of UFC 177 was taunting me. I knew it. The Old Ones were taunting me, agents of Cthulhu. This wasn’t happening, this was just a projection, I reminded myself. There was no Tony Ferguson, nor a Danny Castillo. The tears had welled up in my eyes, myself descending further and further into the mouth of madness.

“BE GONE, DEMONS,” I shouted at the top of my lungs, security guard shaking his head in my direction, like I had lost my mind. My mind was pure, dearest readers, just like my holy water-dashed face. I stood in the stands, beholding upon the creation of Cthulhu that was UFC 177, the event that should not have been, the event that everyone saw die just days before. A lone tear welled up in my eye, fighting to escape, rolling down my cheek.

More followed while Dillashaw landed at will on Joe Soto. Who was Joe Soto? Did it matter? Would I ever see my Esther again? I stood, entranced, throughout all five rounds until that fateful moment, the moment that shin met skull, Soto staggering before being put down once and for all. Tears streamed down my cheek freely now, the faucet wide open. I fell to my knees, awash in a puddle of stale beer, nacho cheese and Axe Body spray runoff. I could feel her presence while a light emanated from the eyes of TJ Dillashaw.

“Oh Esther,” I cried out, feeling her surrounding me. “What have I done, Esther? What have I witnessed?”

The lights went out. 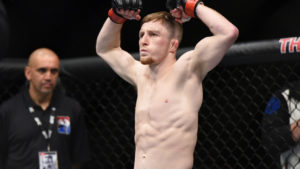 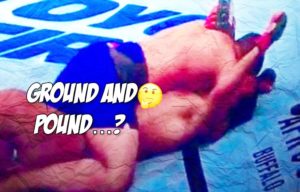 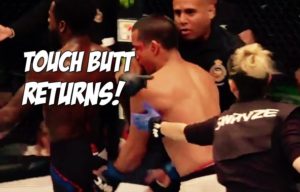 Video: After choking out Chris Beal, Joe Soto slaps him on the ass one, two, eight times!?! 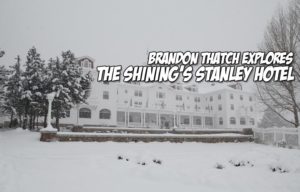 UFC welterweight Brandon Thatch explores the hotel from “The Shining”