Get the LIMITED-EDITION ‘Train By Day’ shirt that GLOWS IN THE DARK!

It was the quote that inspired a generation, or at least a really cool intro on Joe Rogan’s podcast. After Nick Diaz’s triumphant return to the UFC against BJ Penn at UFC 137, Nick got on the mic and stated he “Trains by day, Joe Rogan podcast by night — all day!” To this day it still doesn’t quite make any sense, but that hasn’t stopped his statement from being repeated endlessly on the internet.

Now that we’re just a week away from Nick Diaz’s first UFC title shot against Georges St. Pierre at UFC 158, why not commerate the event with this limited-edition ‘Train by day – Glow in the dark’ shirt!

The color of the shirt is a faded green in order to make the glow-in-the-dark ink appear ‘invisible’ on the shirt when visible in the daylight.

During the day, a faded green ‘Train By Day’ appears on the torso in front of a faint yellow sunrise.

At night, the shirt lights up with a glowing green text that reads ‘Joe Rogan Podcast By Night’ hanging right above a glow-in-the-dark lit moon.

Pre-orders of ‘Train By Day’ will be accepted from March 9th – March 17th Orders will be shipped 2-3 weeks after March 18th.

The ‘Train By Day’ is one a limited-edition print, they will never be made again! Once they’re gone, they’re gone! 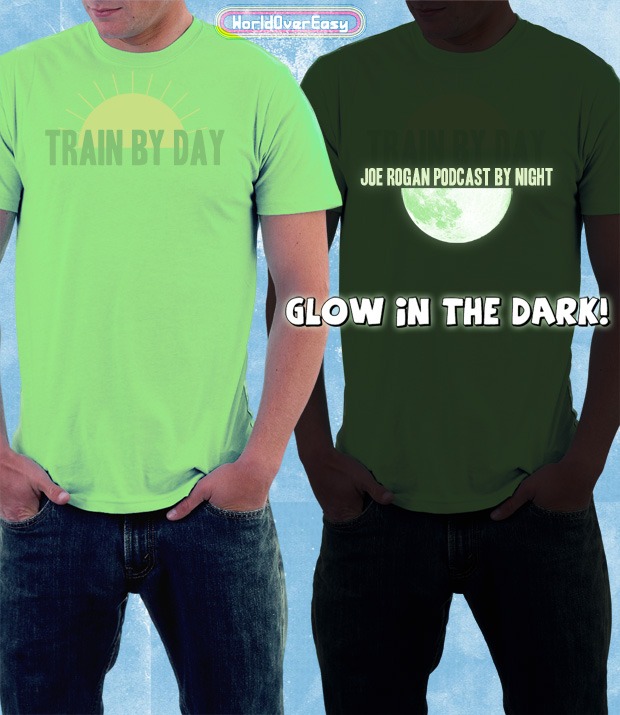 Start off your Sunday morning with a floppy arm from Bitetti Combat
Read Next Post →
Click here to cancel reply.