I got a vegetarian friend that always likes to start off conversations by telling me how bad meat is. I always like to end those conversations by telling him ‘If meat is bad for you, then why is it still a food?’ Despite popular belief, you can not catch hepatitis B from eating shellfish, however if you have hepatitis B doctors suggest that you should stay away from shellfish. If Aquaman had hepatitis B, his life would be ruined. He wouldn’t be that underwater superhero we’ve come to know. Instead, he would probably be that guy at the corner store who sold you packs of cigarettes when you were underage.

According to Guilherme Cruz of TATAME Magazine, Geronimo dos Santos had to drop out of his UFC 153 bout against Gabriel Gonzaga due to a case of hepatitis B. One can contract hepatitis B from sexual contact, shared needles from drug us, blood transfusions, or unclean needles from tattoos. Bummer for Mondragon, and let’s hope Josh Barnett is alright after that bludgeoning he gave dos Santos at Impact FC back in 2010. 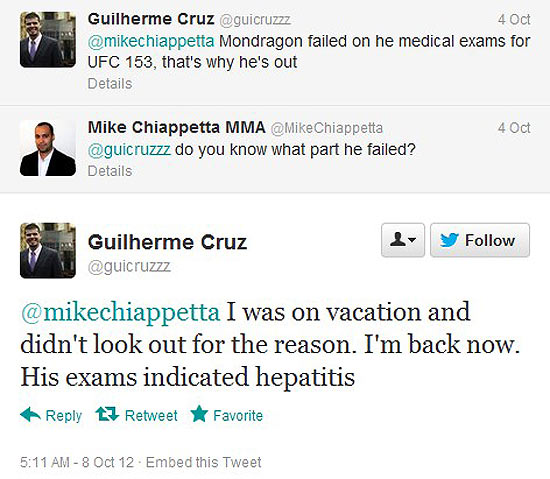 A 62-year-old fighter KOd his opponent with a spinning backfist, here's the video
← Read Last Post

Blast to the Past: Remember that time when Rich Franklin was supposed to fight a guy from UFC Iran?
Read Next Post →
Click here to cancel reply.