Georges St. Pierre remains the UFC welterweight champion, and then sort of retires…sort of

Alright, I had Johny Hendricks winning rounds two and four and Georges St. Pierre taking the first and third round. As far as the last round — it was up in the air.

The problem with watching the fights with commentary is that you start to believe what is being told to you by Joe Rogan and Mike Goldberg. It happened when Gust took on Jon Jones — everyone thought Alexander did enough to beat Bones, but upon a second viewing everyone could tell that Jones definitely fought valiantly to retain his UFC light heavyweight strap.

Now did the same thing happen tonight at UFC 167? Perhaps. You wanted Georges St. Pierre to lose and you wanted Johny Hendricks to be the guy that did it — but that’s just wishful thinking. In reality in order to be the champ, you have to unquestionably beat the champ. Hendricks had twenty five minutes to land his heavy ‘one-punch KO’ fist, and he didn’t. Alright, he landed it multiple times, but GSP didn’t go down. Now that should either tell you that Hendricks punching power is drastically overrated, or Georges St. Pierre has a chin made out of unobtainium.

After the bout, Georges St. Pierre sort of said he was taking a break to take care of personal stuff — which I assume would mean that he’s packing up his bags, bringing his passport, and taking a visit to his ‘dark place.’ We won’t know when he gets back, neither will GSP. However, a UFC welterweight champion must do what a UFC welterweight champion must do.

Now let this .gif singe in your head for the rest of your life.

Oh, and props to @ekc for taking a photo of the official UFC 167 score cards. 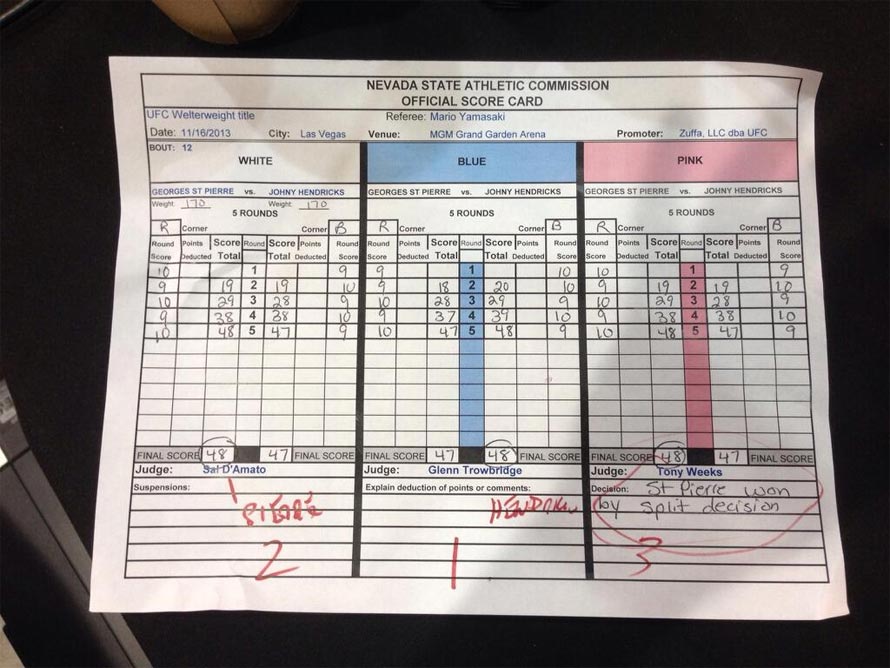 Still want to vent more? Then go on the MiddleEasy Boards and tell the world how you feel!

You must look at this photo of Georges St. Pierre's face at the UFC 167 post-fight press conference
Read Next Post →
Click here to cancel reply.