Gegard Mousasi vs. Gary Goodridge going down at Dynamite!! 2009 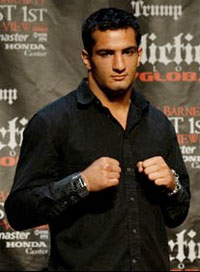 On the eve of the day when you gather around a pine tree and watch as people pretend to be excited at something you got on sale at Wal-Mart, another Dynamite!! 2009 bout has surfaced…and it’s not Misaki vs. Manhoef. At the end of the press-conference tonight (today in Japan), there was a mention of another superfight that would be outside of the whole Dream vs. Sengoku theme that has been going down throughout the card.

According to Jason High, that mystical bout mentioned at the Dynamite!! 2009 press conference is none other than Gegard Mousasi vs. Gary Goodridge. At least that’s what he told us via Twitter from one of his ‘close sources’. I’m not doubting his source, dude has stepped foot inside the Saitama Super Arena while we all sat on our sofa with boxes of Devil Food Cake Cookies. I really wish I had more information on this but according to High, the fight has been ‘signed’.

Everyone wanted their ceremonial New Years Eve freak show, now you have it. You can all go back to sleep or continue to drink with your alcoholic Uncle until Christmas morning hits. [Source]