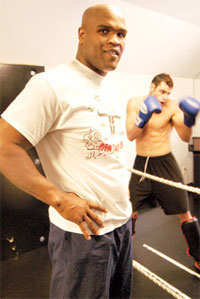 Let Gary Goodridge set the example for the rest of the MMA world on the proper way to deal with promoters that promise the world, but instead only deliver the equivalent of a war-torn third-world country.

CagePotato broke the news this morning that Gary Goodridge walked out of this past Saturday’s MFL bout after he confronted the promoter on whether he was going to come through with the payment he promised Big Daddy. Apparently the guy put twenty-percent of what was promised in Gary’s hand which just wasn’t good enough for Goodridge.

“All night I kept asking [Waardenburg] where my money was and he kept saying he couldn’t pay me because there were too many people around. I was like, ‘Why can’t we go into a bathroom or something?’ you know? Finally, I’d had enough and I talked to him just before they were about to announce the fight and I told him I wasn’t going out there unless he paid me. He gave me 20 percent of what he promised me and he told me he couldn’t afford to pay me the rest. I handed it back to him and I told him I wasn’t going to fight unless they came up with all of it. “

I’m not even sure why anyone would intentionally short a guy that has the ability to do this to your skull. It’s the same as cooking a bad risotto and serving it to Chef Ramsey. To be honest, it’s nothing like that. Gary Goodridge would elbow any ill-served risotto out of whatever kitchen it was created in and look amazing doing it.  [Source]

Exclusive interview with Mark Munoz
← Read Last Post
You think Overeem turning down a fight with Fedor because he lost was 'buster'
Read Next Post →
Click here to cancel reply.