Gabe Ruediger will get another shot in the UFC

Posted on Last updated: September 1, 2010 By: Author Team ME 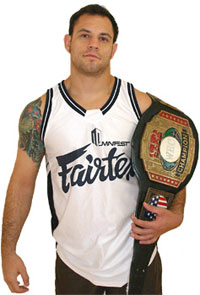 UFC 118 was the first time in which someone created a hype video using cardboard boxes and Godzilla pajamas and found a way to back-up every morsel of it in two-minutes of absolute beatdown. Collective effervescence was at hand when Joe Lauzon raged on Gabe Ruediger with a blitzkrieg of strikes. After one strike landed, another one took off; Lauzon pulled a Gatwick airport on Ruediger. Gabe fully understands this and on his personal blog, he says Joe Silva will give him another shot in the UFC.

“Well, I fought Joe Lauzon and lost. I didnt just lose, I lost without even really getting to fight. Joe over whelmed me and I never was able to start, Congratulations to him. I felt fine going into the fight. My weight cut was the easiest ever and I had a great group to corner Joe came out hard and kept the pressure on me. After some of the shots he landed, I honestly have no idea what happened or what was going on. I know I was armbarred, but I dont know which arm or why I tapped, because my arm feels fine.”

“I took this fight with 2 weeks to prepare and I truly felt that I would be ready. Would it have been different with a full camp? Ill probably never know. I am very disappointed with my performance and have a LOT to work on when I get home.”

“I spoke with Joe Silva from the UFC and he told me I would have at least one more chance and next time I would have the proper time to prepare. For that I am happy, but I still cant believe how bad that fight was for me.”

Joe Lauzon looks like he’s forever on the verge of telling you something important. That’s it. [Source]