I’ve personally witnessed a French guy drop an entire lit shot of Absinthe on his pants and casually brush the fire off as he repeated a Dave Chappelle joke. This same French guy was also friends with this other French guy who used to rob parked cars on the streets of Pontypridd, Wales solely for coats and jackets. His name is Guilherm and five years ago he accompanied me when I had a rather interesting experience with a seed known as Hawaiian Baby Woodrose. After the ‘event,’ I wrote about it on Erowid so feel free to read about one of the (many) times when I was completely out of my mind.

It appears that the notable French MMA site, Riddum.com, is accusing Fuel TV of rigging the polls for the most recent edition of UFC Tonight. Sure I could summarize the accusation, but I’ll just let Thomas V., chief editor at Riddum.com tell you what’s going down in an email he sent.

I am the chief editor at Riddum.com, a leading French MMA news website. I would like to bring your attention on an injustice that happened this week that angered thousands of MMA fans – which you may want to share with your readers.

The UFC Tonight crew (FUEL TV) blatantly rigged the results on the poll – Where Would You Like To See The UFC Go Next ? – that offered 4 options: China, France, New York, and Russia. They announced New York as the winner with 52% of the votes and France with 31%, which is completely FALSE. France is the actual winner, receiving most of the votes. 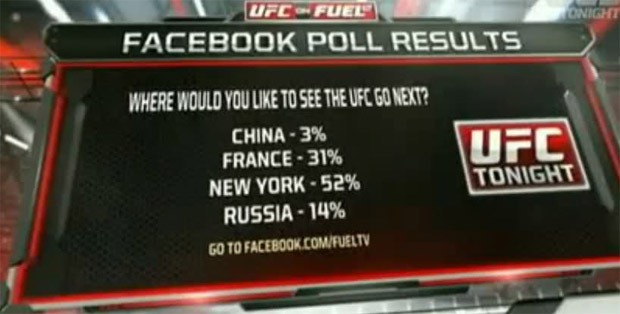 You can view the real poll results on Facebook or with this screenshot (taken on January 17 before the airing of UFC Tonight, Episode 3): 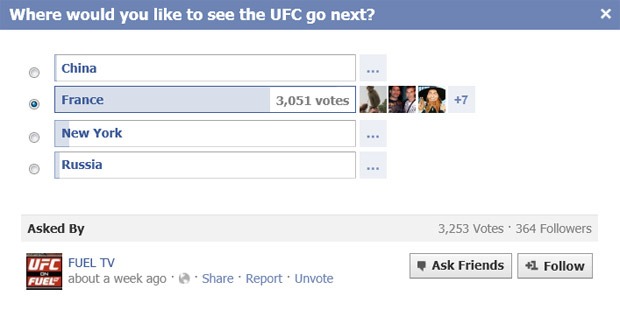 Hundreds of fans immediately protested the results on FUEL TV’s Facebook page and Twitter. FUEL TV finally responded back on Facebook, claiming that the poll results were collected on January 12 at 5 pm PT, so basically less than 2 days after the poll was launched and 5 days before the results were announced, which is ridiculous for anyone to do…but let’s say they actually did that. According to them, at that time, New York was leading the poll – yet another lie from FUEL TV. 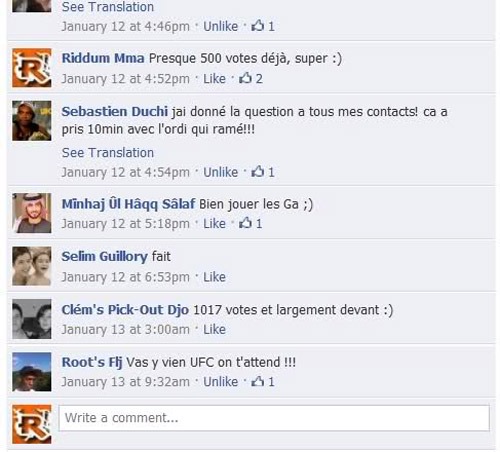 France continued to be the number 1 choice hours before the alleged time (5 pm PT) the poll results were collected, as evidenced above.

Here is the show’s host, Todd Harris, witty response to one of our readers:

Thousands of fans mobilized to make their voices heard and tell the world they want the UFC in France, where MMA is still banned. We shared and promoted their poll, only to get lied to and robbed in the end.

Feel free to contact me should you have any further questions.