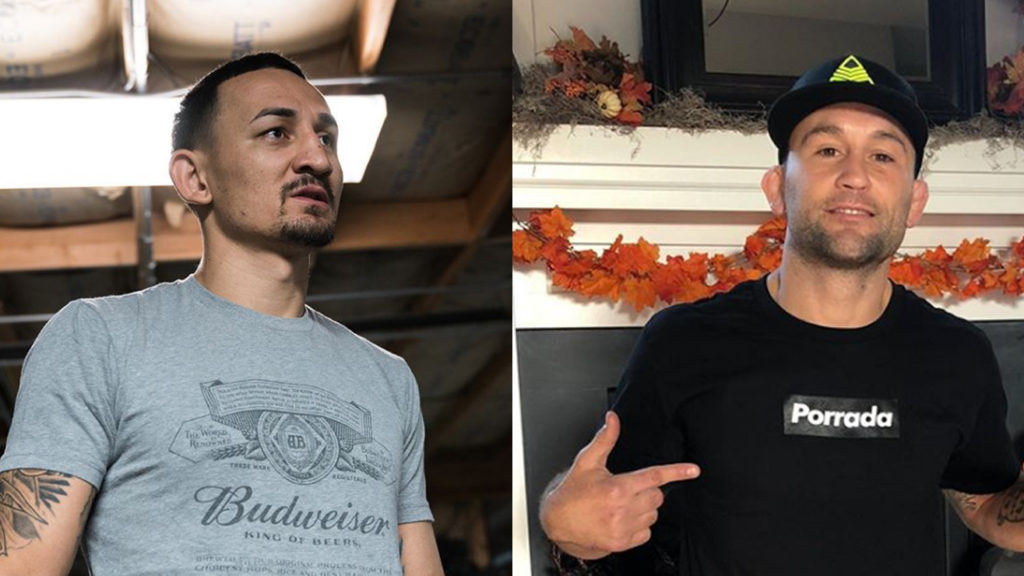 Frankie Edgar Believes He Is Next In Line For Max Holloway: “I Think I Am The Guy Who Can Get It Done”

After a TKO win over Brian Ortega last Saturday, Max Holloway climbed to the second place for the longest UFC winning streak with a score of 13. He is undefeated since August 17, 2013, when he lost to Conor McGregor. The Hawaiian defended UFC Featherweight title for the second time.

Max Holloway fights in 145-pound division since UFC 143, where he made promotional debut versus Dustin Poirier on February 4, 2012. But it looks like “Blessed” considers moving one division up at the moment. Especially after Dana White said he’d like to see Holloway in 155-pound weight class at UFC 231 post-fight press conference. Slow down Max, Frankie Edgar thinks he is the next in the line for UFC Featherweight title shot. (h/t MMAMania.com)

“I already rang Dana up and he said we are going to talk,” he said on Ariel Helwani’s MMA Show. “I had that title shot, it was mine, and then Max got hurt, it happens. And on two weeks notice I just said throw anybody in there. I want to fight,” Edgar added about his willingness to face anyone on short notice after his title fight fell through.

Max Holloway and Frankie Edgar supposed to meet at UFC 218 but Edgar pulled out due to an injury. They were rescheduled for UFC 222 but this fight fell through too. “Blessed” suffered a leg injury. Brian Ortega stepped in as a last-minute replacement. It didn’t go well for “The Answer” since “T-City” defeated him via right uppercut KO in the first round.

Frankie Edgar rebounded back with a victory over Cub Swanson at the co-main event of UFC Fight Night 128 on April 21, 2018.

“Things didn’t go my way, obviously, I got caught with that shot. But, I ran it back with Cub and was able to get a win. I think I am next in line and I think we should go back to that fight. I think Holloway, not that he owes me anything, but, I think we want to get that one done,” he added.

Frankie Edgar believes he is the great choice for Max Holloway if the current Featherweight champ decides to remain at 145-pound division. “The Answer” thinks he can defeat Holloway.

“I told (Dana), I gave my shot up, and maybe it wasn’t the best idea, but I thought I was going to win that fight and it didn’t go my way. And he said ‘we will see,’” he said. “If Max stays I am definitely the guy for him to fight at 145. If he goes up, who knows, I think Max wants to stay at 145 and we have unfinished business. I am not Ortega, and I am a different type of fighter than him, a different challenge for Max and I think I am the guy that can get it done.”

Let’s look at UFC Featherweight division rankings. There are other serious candidates for Max Holloway too. It is hard to expect it’d be #2, Jose Aldo, since “Blessed” already defeated him two times, at UFC 212 and UFC 218.

Frankie Edgar is #3 UFC Lightweight contender, but #4 Renato Moicano could also spoil his plans. Moicano comes with the UFC score of 5-1, and two consecutive wins over Calvin Kattar and Cub Swanson.

What do you think, what happens next? Will Frankie Edgar get a title shot versus Max Holloway?

Rumor: Conor McGregor may be in legal trouble in Ireland, delays next fight
Read Next Post →
Click here to cancel reply.