Before writing this EA Sports MMA article, it just occurred to me that KFC is selling a sandwich entirely composed of meat. There’s no bun. I’m pretty sure Nostradamus predicted this in one of his quatrains, which means that it’s another sign this world is coming to an end. Just imagine being in that KFC boardroom when that idea was approved. Better yet, imagine how much whiskey was swigged that day, ‘Screw the bun, let’s make that [expletive] meat on meat…on meat, son!’. That quote is only funny if it came from Marlon Wayans.

Gamepro managed to abduct Frank Shamrock for an hour to get him to tell us how EA Sports MMA will dominate the videogame market when it’s released on October 19th in the US (October 22nd everywhere else). He presents a fairly convincing argument as to why this game will be amazing, and it’s hard to disagree with him. The game is believably unbelievable. Check out this interview with never-before-seen footage, and we were just joking about the KFC stuff. By no means do we suggest the marketing department at KFC abused alcohol the day the ‘Double Down‘ sandwich was created. Take that attorneys. [Source] 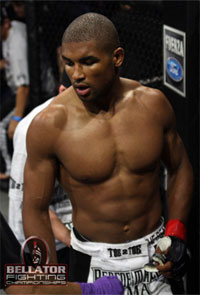