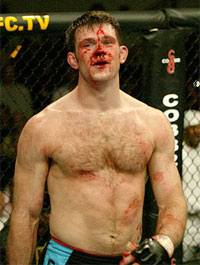 Anderson Silva fan or not, you have to admit his Forrest Griffin knock out was perhaps the most precise and elegant KOs in UFC history. It was as if all the rings from Captain Planet were combined and stuffed into one single stepping-back jab. Get out your tin-foil hat because now the conspiracy theories are starting to spread throughout the MMA world. Did Griffin take the fall? Was the mafia involved? Even claims that the entire fight was rigged by the UFC to establish Anderson Silva as the best pound for pound fighter in MMA. We still think it’s all part of the UFC Undisputed videogame cover curse. Either way, we all witnessed Forrest Griffin bolt out of the Wachovia Center at UFC 101 and he’s never been seen or heard from since…not even by his boss, Dana White.

“I haven’t seen him since. He might be in Georgia by now,”

“He’s an emotional guy and we’ve seen that from Forrest before when he’s lost a big fight that he thought he was gonna win. He came into this fight very confident that he was going to beat Anderson Silva. He’s emotional.”

Everyone reported that Griffin broke his jaw during the first round (the only round of that fight) and that he ran out immediately after the fight to seek medical attention, but those reports were found to be false. Breaking news: This just in, my ex-girlfriend has sought attention the past two years…I apologize for not giving it to you, something called Halo got in the way of that. [Source]