An array of fighters were thrilled by Adrian Yanez's KO victory over Tony Kelley for obvious reasons.

Adrian Yanez extended his unbeaten record to 5-0 after a sensational first-round KO victory over Tony Kelley at UFC Austin. Even more interesting, Yanez’s fellow fighters celebrated with him.

For those who might have missed it, Kelley is on the spot coming in at UFC Austin following his offensive comments about Brazilians at UFC Vegas 54. Kelley later addressed the issue and stressed that he got “nothing against Brazilians” but he upped the ante once again by flipping the bird before his bantamweight fight with Yanez.

Unfortunately for “Primetime,” Yanez knocked him out early in the fight. The American gave Kelley the middle finger while he was down as he felt his opponent deserved it. What happened next was something even more epic.

A STATEMENT IN HIS HOME STATE 😤@yanezmma was determined to get the finish at #UFCAustin pic.twitter.com/XZOB45HOqi

As expected, Brazilian fighters such as Ariane Carnelossi and Gilbert Burns were thrilled with Carnelossi even tweeting “shut up the bullsh*t talker.”

thank you from 🇧🇷 🙏🏻

Even non-Brazilian fighters were happy to have witnessed Yanez beat Kelley and also took their thoughts on social media.

YEOOO!!! That was FILTHY!!! My guy wants some more!!! Adrian Yanez is the real deal ladies and gents! Just incase you didn’t know that yet! #UFCAustin

Brazil is absolutely loving this fight card right now! Brazilians putting on amazing performances and to top it off Yanez just put a beating on Kelly #UFCAustin

@yanezmma with a big win to finally shut up Kelly!#UFCAustin

Life will show u middle finger back at ya sometimes

Man if you don’t like yanez your just a loser

Told you, Yanez is underrated & one hell of a prospect #UFCAustin @ufc

One of the best strikers in the ufc.

That boy Yanez got some very nice hands!!!#UFCAustin

Adrian Yanez needs a number next to his name🔥🔥 @yanezmma

This is Kelly’s first defeat as a professional fighter, having been KO’d by Yanez at UFC Austin. In addition to reflecting on the mistakes he made during the fight, Primetime may also want to think about being extra careful with his remarks and behavior in the future. 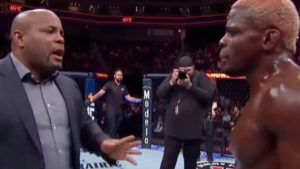