With the Fight Off, Cody Garbrandt and TJ Dillashaw’s Drama on TUF 25 Seems Very Hollow

There is something amazing about those moments in culture when the facade of bullshit surrounding something falls away, even if it’s just for a moment. Whether it’s just circumstances of fate or consequences of hubris, whenever we get a peek behind the Wizard’s curtain and see the frail old man desperately pullign levers, I can’t help but laugh.

And so it goes with this season of The Ultimate Fighter. Somehow I’ve managed to watch every episode of TUF 25, and even though its only been five episodes, it feels like a substantial accomplishment. A season that started with so much promise and online enthusiasm, quickly grew stale and monotonous. Quickly the tropes of reality television in settled in, the formulaic episodes and familiar hard luck stories, the highlight reels from training and in house shenanigans. It also became clear that Cody Garbrandt and TJ Dillashaw were going to trash talk each other every time they saw each other. It also became clear the producer of the show were hell bent on showing every one of those arguments. It also became clear that were goign to be bored as fuck.

Some combine of Cody Garbrandt’s inability to formulate entertaining original trash talk, and the overall repetitive natural of their beef, makes their interactions impossible to watch unless it ends with Cody choking TJ.

Now with rumors swirling that the bantamweight title fight between Garbrandt and Dillashaw is in serious jeopardy, looking back on their constant bickering, it becomes even more unbearably dumb. All the potential drama that was promised with that fantastic choke clip was let out like the air in a balloon.

Garbrandt is currently in Germany getting treatment on his back. Three days straight and two days left. UFC 213 is less than 2 months away.

Somehow, every barb between coaches seems more set up, more artificial. The edited in tension is more apparent, the lack of ill sentiment behind their words all the more clear.  After this week’s episode, you wonder if producers are re-deitting the show, in an effort to annoy the remaining audience less. The sad fate of a TUF season that seems to hold so much promise and has actually had some quality fights and interesting fighters.

Anyway, here’s video of Cody Garbrandt in Germany getting Arnold Schwarzenegger’s DNA injected into his spine.

With Cody living that American tourist life, I believe it’s safe to wildly speculate that the main event is totally cancelled without any real evidence that’s the case. So let’s just pretend it’s officially announced. 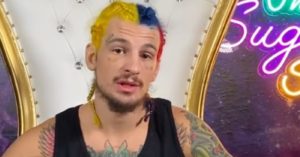 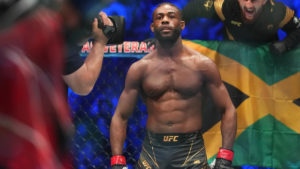 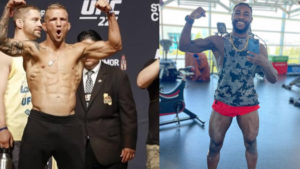