While everyone seems to be affixed on discussing  that M-1 Global is requesting strict drug testing for the Strikeforce Heavyweight Grand-Prix in an newly translated interview via LowKick.com, I’m more concerned with the statement that Fedor has successfully injured everyone he’s trained with in preparation for the Strikeforce Heavyweight Grand-Prix.

Fedor’s coach Vladimir Voronin: It was a great training camp, especially in Kislovodsk. Fedor successfully injured everyone. Broke somone’s ribs (Later in the press conference, Maxim Grishin thanked Fedor for broken ribs), busted someone’s face, so the work was good. In terms of technique, our base is the Universal martial art Sambo. There’s many techniques and still much to learn, so it’s all an ongoing learning process.

Fedor Emelianenko: There’s nothing new about my training. I really enjoyed my camp up in the mountains, in Kislovodsk. My sparring partners were Maxim Grishin and Kiril Sidelnikov, our young guys. We trained really hard, and I hope we’ll see the results in my fight.

Props to Baby Fedor for sacrificing his body to the overhand right of the real Fedor. Also, it’s important to note the rich irony that M-1 Global is concerned with steroid use in the Grand-Prix despite the fact that Kiril Sidelnikov, Fedor’s training partner, was caught with performance enhancing drugs when he was tested after his Affliction: Day of Reckoning fight with Paul Buentello. [Source] 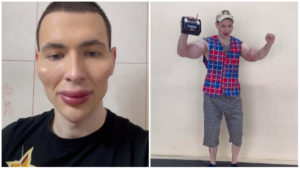