Legend has it that everytime Shane Carwin unleashes his ground and pound, it registers on the Richter scale. Carwin grapples with hurricanes. One day Shane Carwin dropped one of his gloves in Arizona…the result was the Grand Canyon. He drinks from volcanoes and stuffs earthquakes in his roast beef sandwiches. Carwin doesn’t use oxygen, the dude breathes pain. Whenever Shane Carwin isn’t riding shotgun with Voltron, he occasionally visits earth to compete in the UFC. With a record of 11-0, the longest he’s ever been in the cage was two minutes and eleven seconds. In fact, five of Carwin’s wins have been under a minute. On November 21st he will meet Brock Lesnar at UFC 106 to contest the UFC Heavyweight title, but first you must check out this exclusive interview conducted by MiddleEasy’s D**k ‘Starscream’ Grayson. You have to because Shane Carwin said so. 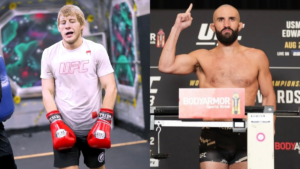