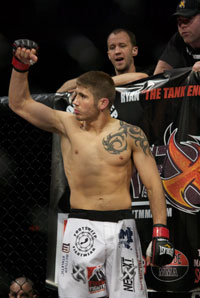 Never before has a violent act of mother nature benefited a human being as much as Ryan Thomas. On April 15, 2010, Ryan Thomas made his Bellator debut at the welterweight tournament quarter-finals against 2008 Bejing Olympic wrestler, Ben Askren. With just four fights in his MMA career, Askren managed to catch Ryan in an incredibly snug guillotine at around the 2:30 mark of the first round. Here’s where it gets tricky. If you check out the video of the fight, at no point did Ryan Thomas tap. In fact, when the ref jumps in, Thomas looks completely coherent as he gives the referee a ‘Dude, wtf are you doing? look. Apparently when Ben Askren sunk the guillotine in deeper in the first round, Ryan closed his eyes as he struggled to get out of the submission. The ref interpreted this as a physical sign that Thomas was ‘out’ and prematurely jumped in to stop the fight. You’ve seen the footage and it’s safe to say that we can all agree the stoppage was dipped in whack-sauce.

Thomas went back to Charleston, Illinois, watched reruns of Golden Girls and totally pigged out on ice cream. Ryan would have fell down a spiral of depression and irresponsible eating if it weren’t for a volcano named Eyjafjallajökull. Just a day before Ryan Thomas’ April 15th debut at Bellator, Eyjafjallajökull erupted for the first time in nearly two-hundred years off the coast of Iceland. The volcanic ash that spewed from it’s orifice (hey, volcanoes have orifices too) was so thick that it sidelined all air traffic traveling to the US from Europe which meant Jim Wallhead was incapable of making his flight to Uncasville, Connecticut to compete in Bellator 15. Without an opponent for Jacob McClintock, Bellator CEO, Bjorn Rebney, called up the one guy that probably would have murdered a small-mammal just for a chance to re-enter the 2010 Bellator welterweight tournament. Ryan Thomas became the first (and only) person in Bellator history to compete in two consecutive fight cards within the organization. At Bellator 15, it took Ryan Thomas just under five minutes to dispose of Jacob McClintock which included a mind-blowing spinning drop punch. Ryan’s victory at Bellator 15 has set up a Ben Askren rematch that will go down in Bellator this Thursday (May 20th) on Fox Sports Net. The smack talk has been rampant, the feud has been ignited and we all owe it to a volcano in Iceland that you probably never knew existed. Check out our exclusive interview with Ryan Thomas conducted by our very own Jay, only at MiddleEasy.com – Because MMA is everything.