Report: Evan Dunham says the UFC has refused to pay his ambulance bill from UFC 216 fight

One of the first thoughts when we first heard this Evan Dunham story? How will UFC fans spin this in the favor on the promotion?

The Internet is a very cynical place to be. Then there’s the MMA corner of The Internet, which is extra cynical. There are also lots of Corn Nuts, Mickey’s fine malt liquor and just a bunch of Affliction shirts laid on the ground; right next to the unsold UFC Reebok Fight Kits.

Per Evan Dunham’s own Twitter fingers the UFC has still paid some of his medical bills from his October 2017 fight at UFC 216. Not cool. Now Dunham is being sent to collections. Really not cool and now our dude’s credit score is all kind of messed up.

“Dealing with collections right now ufc never paid my ambulance bill from two fights ago. Even though I sent the bill in multiple times to whoever is suppose to be handling it. #ufc” 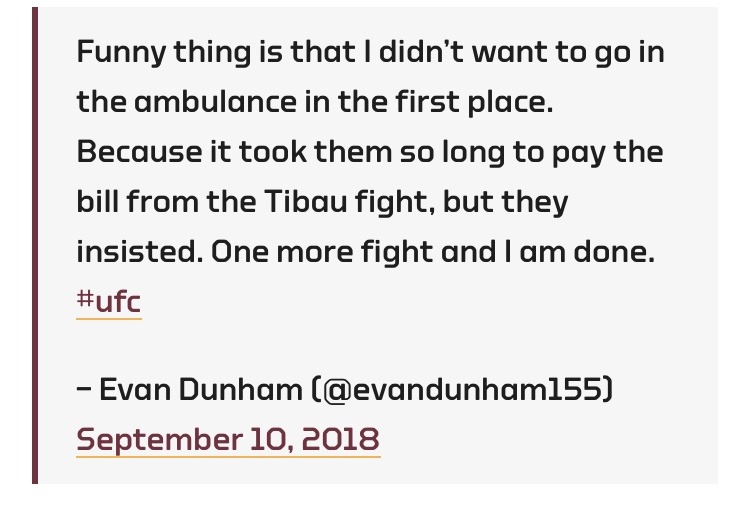 “Funny thing is that I didn’t want to go in the ambulance in the first place. Because it took them so long to pay the bill from the Tibau fight, but they insisted. One more fight and I am done. #ufc”

Look Dunham would later go on to delete his tweets, and pretty much every tweet since April, but the UFC has to better than this. You’re the biggest promotion and stuff like this cannot repeatedly slip through the cracks.

If this is how the UFC treats a pretty well-known, veteran of their company, then how are other fighters being mistreated without any of it coming to light?

Hopefully the UFC does right by Dunham and pays off the medical bills he incurred while fighting in their cage. Also, have someone from the UFC get on the phone with the collection agency and sort it all for Dunham.

H/T to @CH2016 and @AlexanderKLee for the screenshots.

Conor Mcgregor Posted First Video Of His Training Sessions Ahead Of UFC 229
Read Next Post →
Click here to cancel reply.