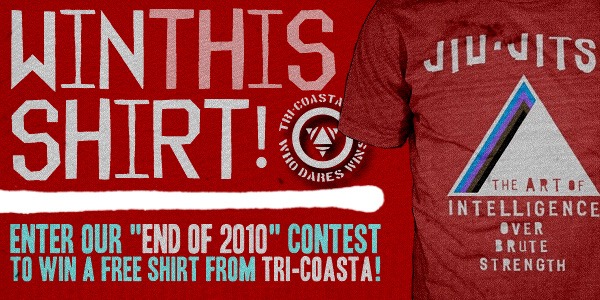 The end of the year is rapidly approaching and we’re just a little over a year from the complete collapse of civilization in 2012. So try not to think about the end of the Mayan Calender and instead, enter our ‘End of 2010’ contest sponsored by Tri-Coasta and MiddleEasy.

Entering the contest is simple, and it doesn’t require the use of Photoshop, HTML or any other creative tool that you should have mastered years ago. To enter the contest, leave a comment on this page and tell us what your most memorable MMA moment of 2010 was. Sure you can go with ‘Werdum’s triangle over Fedor’ or ‘Anderson Silva’s last-minute submission over Chael Sonnen’, but we’re looking for something unique, different, and will make us say ‘Oh yeah! I remember that!’ when we read it.

The contest is open to everyone (even you guys from Iceland) so let the reminiscing begin! Contest ends December 18th. We will award a total of three shirts to three different winners.

Update: Winners have been decided and contacted. Thanks for playing everyone!